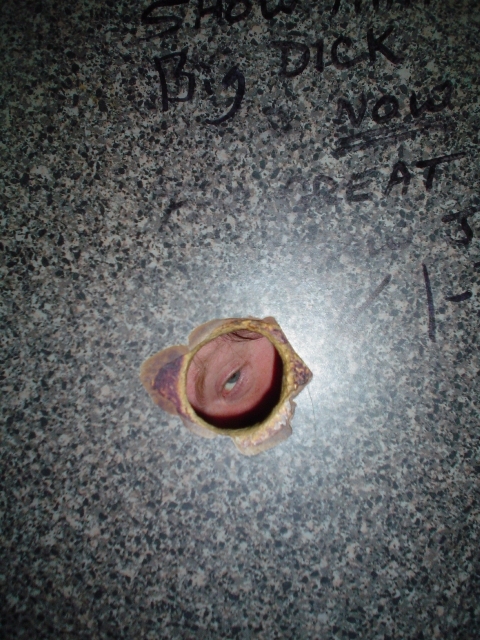 My husband was complaining about how I don’t suck his dick enough. Yeah, let’s just ignore the fact that my vibrator is more of a man then he is. Maybe if he had something worth sucking I’d be on my knees more. I thought it was time he experienced what a nice, big dick feels like so he can understand that he just doesn’t compare. There’s a swingers club just outside of town that I go to now and again. One of the rooms has a glory hole in it and there’s always a line up of men in front of it just waiting to get their dick sucked.

My husband stared at the men and tried to make an excuse so we’d go home but I wasn’t having it. I grabbed his hand and dragged him over there then said in a loud voice that for the next hour my husband, who could pass for Mr.Peanut in the dick department, was going to be servicing them. I went inside the room, shoved out the loser already in there and shoved my husband down on his knees.

A rock hard dick was sticking through the glory hole in the wall, it was long and thick with a nice red head. I wished I’d be the one sucking it. I ran my fingers down the length and whispered in my husband’s ear “See how big it is? That’s the kind of dick I suck.”. I pushed my husband towards it and he took it in his mouth. He did a sloppy job of sucking it and I told him to hold it tighter with his lips and give it harder but slower sucks. I made sure he was doing it properly then sat back and watched. My husband got into it slowly. He wasn’t used to this but soon he was bobbing up and down on that dick like a pro.

My husband suddenly choked and I knew he was trying to swallow the guy’s load.

I loved seeing my husband being used like a little bitch and it really got me wet. I had been fingering myself  while watching him but I needed more to satisfy me. I told my husband this was his last dick of the night. I watched as he eagerly began to suck it. When he was done I led him to one of the private rooms and had him kneel on the ground. I then went and found a willing boy to fuck me while my husband watched. It didn’t take long and soon I was flat on my back while a stranger pounded my dripping wet pussy. I made sure to do lots of loud moans and writhed under him like it was the best lay I’d ever had. As soon as I was done with the boy I sent him on his way.

My husband was broken by that point and he put his hands on my thighs and ran his tongue along my outer lips before pushing it inside. His tongue gave my walls long, slow licks as he scooped up the cum and swallowed it. His stomach must have been full of the stuff by now. I put my hand on the back of his head, holding him in place and laid back. He just kept lapping away at me. After a while I was getting sick of my husband touching me so I let his head go and told him to get off his knees, he’d spent enough time on them tonight at the glory hole. I bet he won’t be complaining about my blow jobs after tonight.