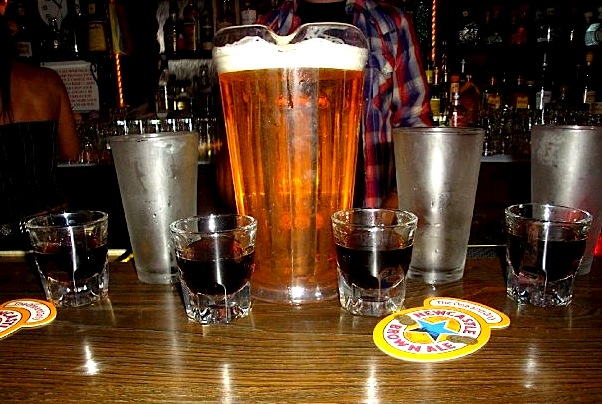 My Brother recently broke up with his girlfriend, and I decided to take him out with me this past weekend, cause I’m such a good little step sister! I knew exactly what he needed. He needed to get drunk, and to get FUCKED. I took him out to the bar. I went to go grab us a pitcher of beer, so we could shoot some pool. I of course was going to let Michelle get a hold of him, but she wasn’t going to be there for a few hours. When I came back from the bar,  This skanky whore Brandy, was all over my big brother!  ( you see Brandy and I have NEVER liked each other, we were rivals in High School… because, well.. I fucked her boyfriend) There was going to be a girl fight tonight.

Don’t get me wrong, I’m a slut… but I didn’t want her all over my brother like that ESPECIALLY since I knew, it was on because she was seeking out revenge.

She was all bent over in front of him, with her FAKE tits in his face, she had on booty shorts with her fat ass hanging out of them, and she was twisting and flaunting all her nastiness ALL over J.

Grrrrr! I was so pissed, I walked up to my brother from behind, and hugged him whispering  almost in a sing-song voice ” She’s a nasty sluuuu-ut”. He rubbed my arm and sung back to me ” Yeahhh, but she’s hoooo-ot” . I Stood up, ” Ewww J. really?!?!?”  and glared at Brandy. I thought to myself, yeah she’s hot alright, her fuckin crotch was like a petri dish.

I looked at Brandy. ” Get the fuck away from my brother”  She Laughed, ” Well Hey Darlin’, how are you?”  I wanted to slap her fuckin teeth down her throat.

” I was just here  talkin to John, and well.. we were catchin’ up, weren’t we  John?” She said, smugly, caressing his arm.

“You’re a nasty skank, and I don’t want you anywhere NEAR J. The only reason you’re even trying to fuck with him is to pay me back for fucking your boyfriend!”

I felt this ice-cold rush all over my neck and chest, and I heard her laughing. Brandy Had thrown her cup of water on me.  The water splashed all over the front of my white tank top, and I wasn’t wearing a bra, it was ice-cold, and my nipples snapped to attention.

… And as Bad as I HATED wasting a whole PITCHER of Ice cold beer, I Slung it all over that bitch! The GIRL FIGHT WAS ON!

She ran up to me, and shoved, and I jumped on her ass! We were a hair pulling, clothes ripping tangled mess.  I Slapped, and punched, not caring where it landed. J. literally had to pull me off of her.  My Tank top was ripped, and stretched, and my tits were falling out, I had been scratched, by her fucking cheap ass press- on nails.

Brandy’s tube top was down around her torso, he hair was all kinds of fucked up, and I had busted her lip. ( That fucking bitch deserved it) I Spit on her, and told her to go fuck herself, because no one else wanted to!

We were all thrown out of the bar.

J. was pissed, and so was I. So I called Michelle to tell her to meet us back at my house, and to please bring a case of beer.

We were riding back to my house, and J. pulled over on the shoulder. ” I want you to know you’re a good sister, and I love you Anna” I smiled at him ” Your not mad?” I asked. ” No, I just can’t believe my little sister got us thrown out of a bar, for fighting and being a bad ass… you mean to tell me, that you wouldn’t have let me bring Brandy back to your house?”

We both broke out laughing.

OH, and FUCK YOU BRANDY.

Do you get a hard-on when you see a girl fight? Tell me about it with Hot Phone Sex!