I Get to Show Daddy Humiliation 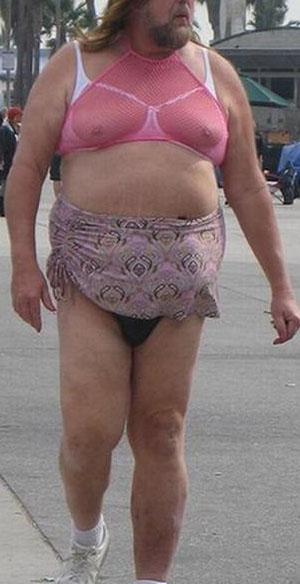 I started to dress Daddy in a pretty little skirt and cute tennis shoes.  As for a top I demanded he wear mommy’s see through under shirt.  But first underneath it he must where a maternity bra with the cups out exposing his massive ugly man titties!  My god the hair on his chest could make one hell of a rug!  Fucking gross man! I had him put on my pretty princess blonde wig.  I didn’t let him shave either.

After he was all dressed up like a pretty little girl.  I decided it was time to go parade him around to the town.  He tried to put up a fight.  However after slapping him at least fifty times across the face.  He finally caved and let me walk him down town.   He was acting like such a pathetic loser.  I mean part of me couldn’t blame him.  He was dressed like one.   I had one of them teddy packs that had a leash on it so I could walk him like dog he is.

I demanded we stop for Ice cream.  As I went to hand him his soft served twist,  I purposely dropped on the ground.  I told him to get on his fucking knees and lick that shit up! Every last drop.  I wanted him to lick up the concrete, loose pebbles, dirt and all! As he was bent over eating off the ground.  I kicked him right in his ass and made him fall head first into the ice cream.  It made me laugh so hard!

As we started out walk back home.  I made him take his shoes and socks off.  He had to put the socks in his mouth and walk the hot asphalt all the way home.

This would be the last time I believed Daddy would try to take advantage of me ever again.  But…. When I got home.  I was totally wrong.  He had the meanest look of revenge on his face.