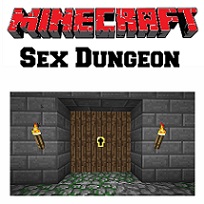 Funny sex stories are some good times especially if they aren’t planned. If you like the girlfriend experience phone sex then give me a call and let’s see what we can come up with. We can make some fantasy sex stories of our own.

When my boyfriend came over we never thought we’d be turning a children’s game into something so kinky. Leave it to me to do something fucked up like that.

Now, I’ve never played Minecraft before because I’ve been too busy slaying dragons and hoarding shouts. That and defying the laws of physics on Pandora.

So, I was watching his dick around and he discovered this mansion out in the middle of nowhere. We started talking about a dream house when it hit me like a ton of bricks. Well, a ton of blocks in this case I suppose.

I wanted him to build me a sex dungeon in Minecraft!

When I told him that, he just stared at me for a few minutes trying to process what I’d said. Then a smile slowly spread across his face and he said he could do it.

Conveniently, he found this room that looked like a fighting cage of some sort already made. So, inside the cage, he put a small bed, a water and food bowl, and a drain in the middle of it.

Above on the balcony, he put some gothic looking couches, some torches, and some red banners. On the outside of the massive cage, he put a stockade looking thing that’s usually a wooden gate I guess. We spent hours finding fun and creative ways to turn things into something kinky.

Finally, it was all finished and I have to say that we did a fantastic job. I’m quite proud of it myself.