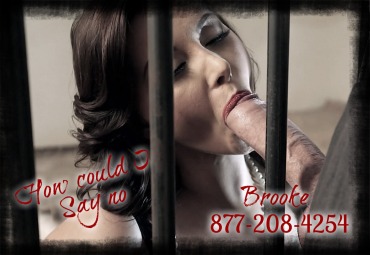 I can’t believe I ended up fucking my client!!

Of all the guys I could be fucking, I ended up with one of my clients! I was doing pro bono work at a prison after receiving my psychology degree. I had been counseling Anthony once a week for the last 3 months. At first, the routine at the prison seemed intimidating but after awhile I got used to it. I would call ahead to let them know I was coming, they would take my client out of their cell and put them into a holding area until I got there and then we went into another room used for visitors. The holding area was basically just a room with a cell inside of it. I used to think that it was strange that there was no surveillance in there but I learned later that they used the room for some pretty unethical interrogation at times. Oh well, I was new to all of this and definitely not about to overstep any boundaries before I even got my career off the ground.

Anyway, I called ahead as I was supposed to, but I got there earlier than expected. I was checked into the prison and headed over to the holding area. I couldn’t find any guards to get Anthony moved to our room and decided to see if he was in the holding cell. I walked in and saw him sitting on a bench. I decided to just wait in there with him until the guards showed up. He’s a pretty good looking guy and we often flirted a little during our sessions so I wasn’t surprised when I allowed our conversation to become a little more sexual.  I asked him how long it had been since he had sex. When he replied that it had been over eight months my mouth dropped open.

“You have got to be fucking kidding me!” I exclaimed as I reached into his cell to put a comforting hand on his shoulder. But when I glanced down at the bulge in his pants just from our sexual discussion and the simple touch of my hand I knew he wasn’t lying. I quickly diverted my eyes, not wanting to get caught glancing at his cock but it was too late; he already saw where I was looking. I moved my eyes back to his and the look on his face made me want to do something for him. I knew there were no cameras in here so what would it hurt if I just played with is cock a little?

I reached my hand into the elastic waistband of his pants and wrapped my fingers around his hard cock. I couldn’t believe the size of him! His eyes closed and his head fell back just enjoying the feeling of a woman’s hand stroking him off. I wasn’t paying attention to anything else so when I felt his hand on my thigh through the bars, I jumped a little. I moved closer allowing him to touch me. His hand moved up between my legs up to my panty-covered pussy. He pulled them to the side and began rubbing them up and down my wet lips. When his finger slid into my tight hole I let out a small sigh and he gave me that cute little smirk that he does when he gets his way from me.

He started fucking my pussy with his fingers as I continued stroking his cock. He was up to three fingers fucking in and out of me and I was so turned on that when he pulled them out I actually whimpered! My eyes opened just as his fingers slid into his mouth. I watched as he sucked the juices from my pussy off of his fingers. It turned me on, even more, knowing that mine was the first pussy he had tasted in over eight months.

His fingers slid from his mouth and came back through the bars. He grabbed ahold of my hips and started to turn me the best he could. I knew what he was trying to do so I willingly turned myself around. He lifted my pencil skirt up over my plump ass and then squeezed my cheeks. He had one in each hand and I let him take his time, knowing that he hadn’t seen a naked woman in quite some time. He spread them apart exposing both of my holes. I thought he was just looking but then I felt it.

The head of his cock was resting just outside of my hole. He took one of his hands and began rubbing it up and down the length of my crack coating it in my pussy juice. When the tip started to push inside of me I reached back with both hands and grabbed onto the bars to use as leverage as I pulled myself back onto his cock. In one swift motion, he was inside of me. His cock was so fucking big! I had to stay still for a moment to adjust to the size of him stretching out my pussy.

Just as we had everything back in place a guard walked in the room! I knew he could smell the sex in the air but he just gave me a little smile as he asked if we were ready to go into the other room. I tried to act natural but it was really hard!! I had just almost gotten caught fucking my client and in prison on top of it!! The thrill of it all was so exhilarating! This was just the beginning of some really naughty adventures for me and I can’t wait to tell you about them! Give me a call and I’ll share them all with you!