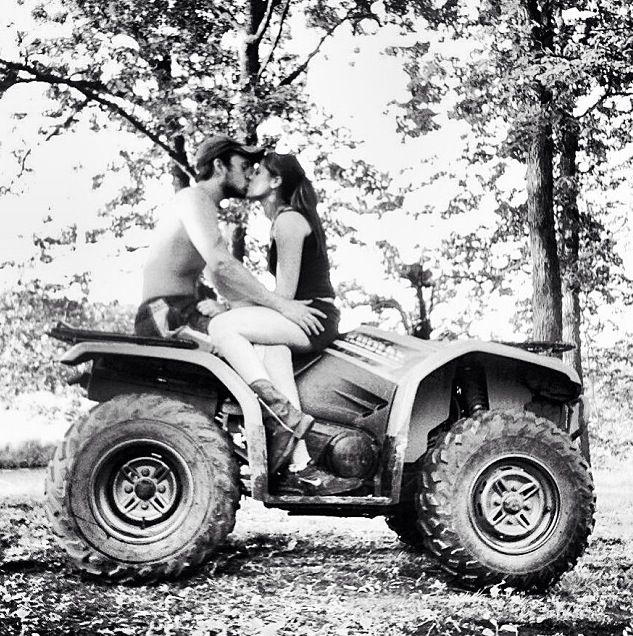 Growing up I always had the biggest crush on my cousin Roger. He was tall, dark-haired and has this sexy southern charm about him. He was from the Big ole state of Texas. I always dreamed of him being my first kiss, my first touch, my first everything. He wasn’t unfortunately, but when my momma and daddy told me he was coming to visit, I was overcome with happiness. This was going to be my chance at “kissin” my cousin, and a sure-fire way to have a little family fun.

Roger arrived and I ran to greet him. I was out back pulling the four-wheeler out so we could ride around the old Brantley farm. He was sexier than I could have ever imagined. It had been at least 4 years since I had laid eyes on my well-built cousin. I grabbed his hand and showed him where to leave his belongings, and yanked him out the back door and across the yard.

I asked him if he wanted to drive, or ride. He responded with nothing less that what I like to call a “shit eating grin”. That naughty smile spread wide across his face, and it was so sinister and sexy, I felt my panties dampen. I figured a long drive way out onto the Brantley farm was sure to entail some Family fun.

He drove, assuring me he had driven before. He mounted the four-wheeler and I saddled up close behind him, grabbing around his stomach and pressing my ample tits into his back. We flew across the farm, laughing and jumping the ramps the Brantley boys had fashioned. We came to a big mud hole, with a small jump. Rog wanted to jump it, but he gassed it too late and we landed hard smack dab in the middle of the mud hole. Mud splattered up over us, and the four-wheeler was smoking.

He pushed as I pulled and we drug that four-wheeler out of the mud hole. I told him not to worry, it had happened a few times before and it just needed some time for the engine to cool down, so we poured some clean pond water over the engine, so it could cool off and not be clogged with mud.

We talked about how when we were younger, we were so competitive. We went back and forth about who was better at this and smarted at that. I took the initiative and challenged him in a race! I knew he couldn’t keep up with me, well… maybe he could but I for damn sure was going to give it everything I had. Roger chased me, and he was much faster than I had remembered. He chased me deep into the woods, and I knelt down behind a tree to catch my breath. When he found me, I had nowhere to go. He grabbed me and started tickling me until I fell to the ground, and he fell on top of me. I stared into my cousins beautiful wanting eyes, and I could feel the jolt of passion between us, and without warning, my cousin leaned in and french kissed me. I was lost in his kiss, and wanted him badly, I began pulling his shirt over his head, and he pulled my top over my head. This was the beginning of the family fun I had wanted for so long.

We lay there grabbing, and groping one another beneath the shade of that big oak tree at the far end of the Brantley farm. 2 cousins became 2 lovers that day.

Family fun was always something that heated me up. I have brothers, uncles and cousins that are very flirtatious, and I have often dreamed of family fun, and fucking their brains out.

To hear about the family fun that happened with Rog and I, tune in for part 2.

If you can’t wait, Then By All means, give me a ring  for some Totally Free Phone Sex! 😉