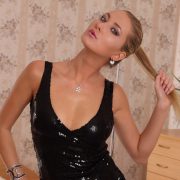 My eyes close for a moment as I remember a forced prostate massage I gave to a client.  Oh, maybe it started out that way but he certainly looked at things different when all was said and done.  The experience gave me a thrill almost like forced sex encounters I personally experienced or shared by friends.

I have had many interesting clients.  For the sake of privacy, we’ll call this client Donald.  Donald had such a hot body, with all the nice muscles in all of the right places that any girl or guy would admire.  He was a great client.  Another client referred Donald to come to see me.  My favorite area to massage on Donald was his ass.  There was something so nice about his muscular bottom.  Perhaps it was the firmness or the hard muscles.

Donald and I discussed many things while he was on my table.

It was pretty normal for clients to sleep or talk and open up about different things going on in their lives.  In essence, I became a client’s therapist and their confidant.  One day Donald confided to me that he was having some issues with constipation.

The deviant part of me found an opportunity I could take.  You see there are other ways to help constipation other than what I was about to do.  I couldn’t pass up the chance to get into that fine ass that I’ve been creaming my panties over.  Donald was a nervous gentleman so would have to move carefully.  He had truly come a long way.  He was initially hesitant about getting a massage but after experiencing his first time every time after, he would strip and get right on the table.

My pussy got wet just thinking about his ass.

Smiling, I reassured Donald and told him we could take care of helping the issue.  I proceeded with the massage.  Donald sighed and relaxed into the massage.  Finally, near the end of our massage I had Donald turn on his side.  Next, I put on some latex gloves.  Through the sheet, I could see Donald’s cock get hard when I touched his back with my gloved hand.  Did this man love latex?  This was something new I wanted to explore with him later.

Reaching into a drawer I found what I was looking for, some lubricant.  Applying generous amounts to my glove and his bottom, I started slowly caressing his ass.  Donald started to tense up.  He begged me to stop as this was hurting.  I think the mere fact of him begging just made my pussy wetter.  My finger fucked Dona’d’s tight asshole over and over.  Donald began to shake and struggle.

His screams and whines filled the air.

I turned Donald onto his stomach and mounted him to hold him down as he thrashed about.  His ass squeezed my latex glove.  I could think of a lot of things I would love to put in that hole.  Moving my finger inside, I found the magic button and began to apply a little pressure.  His prostate felt like a small little nut.  The pads of my latex glove caressed his prostate.  Screams became louder but didn’t seem the same anymore.  These screams were like the screams that come from a good little bitch boy enjoying a good fucking.

It wasn’t all forced prostate massage.  So much more took place.  I can’t wait to share all the details with you.  Whatever you crave, I’m ready to explore with you!  The best fetish phone sex is waiting for you!  Call me directly.