Forced Femme – I Made Him My Pretty Little Panty Bitch!* 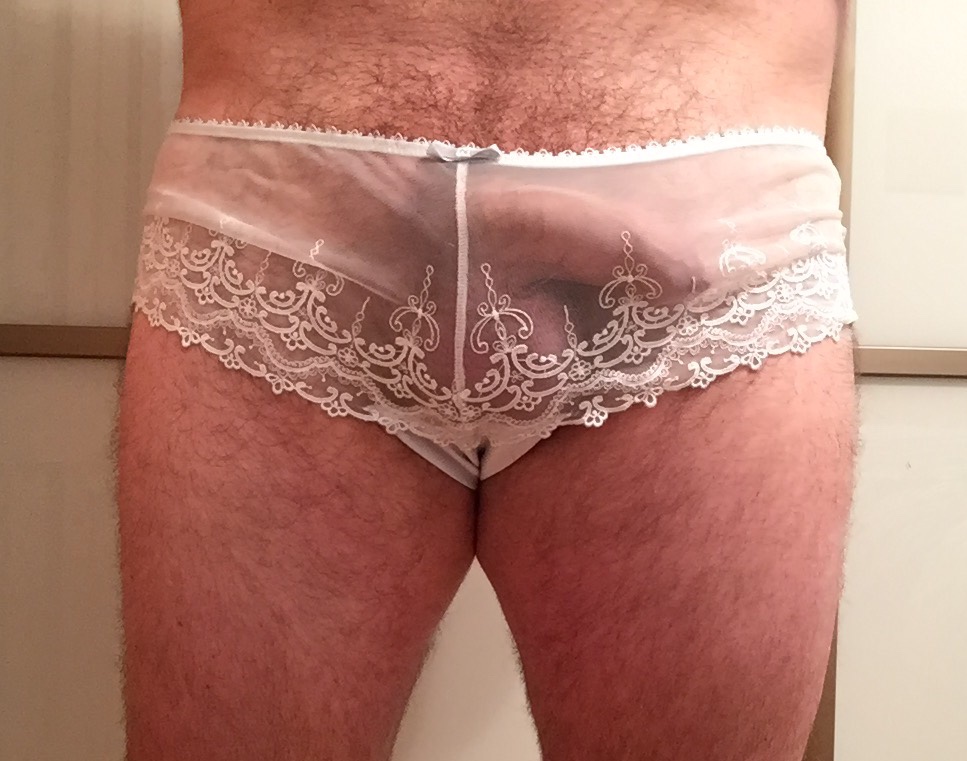 I have a new lover. One of many, but that’s another story for another time! 😉 He is very well dressed, very appearance oriented, and well… he’s man pretty! I just had a feeling about him. My intuition is seldom wrong. He’s really into helping me pick out lingerie and clothes. Hanging out with him is kinda like hanging out with my gay guy friends, only with fucking added into the mix.

We go shopping, he helps me pick out pretty clothes and lingerie, then we take it home and I model it for him. Sometimes? I get the idea that HE would like to be modeling it for ME instead, though I know he would never admit to it! I finally decided it was high time for a little forced femme to make him face this realization. (Plus, I knew it would be fun for ME! You know how I enjoy my little games.)

The other night we had a date. I answered the door wearing a little black baby doll nightie and pretty black lace panties an high heels to match. He whistle appreciatively and stepped quickly inside, wrapping his arms around me. He murmured against my hair as he held me, “Wow. You SAID you had a special surprise for me, but I wasn’t expecting this! I take it we’re staying in tonight instead of going out?” I laughed a little, having the advantage of already knowing about my forced femme plans. Nodded and smiled, saying that while I was happy he liked what I was wearing for him, that wasn’t actually the surprise.

He looked somewhat confused as I slipped into my bedroom, and then happy when I came out carrying an elaborately wrapped box. He immediately recognized that it was Victoria’s Secret (see what I mean?) and a huge smile spread across his face. I knew he would LOVE what was inside, even if he didn’t know yet that HE is the one that would be wearing it! He daintily unwrapped the package, careful to save the ribbon and fancy bow. When he pulled the top off of the box, he immediately exclaimed in delight at the very lacy, very delicate, very feminine and pretty pink lace push up bra and panty set inside. “Wow! TWO new sets of lingerie in one night? I’m a lucky guy! Why don’t you go put them on so you can show off for me?“

He looked so confused when I handed him the box that I almost felt a little sorry for him. Almost. He asked why I was handing him the box, and I just smiled and reminded him that I said the present was for him, not for me! Finally the realization dawned on him that I wanted him to put the bra and panties on. A look of sheer panic crossed his face and I had to laugh a little out loud. His cheeks blushed rosily, and in my sexiest purr, I told him it would REALLY turn me on to see him in that pretty pink outfit!

“NO WAY!!!” he shouted, but I noticed he didn’t let go of the box, either. And I was fairly sure there was a small bulge beginning in his pants. I looked at him with my most captivating and seductive pouty look. “Pleeeeeease baby?” I was sitting down, and I opened my legs a little, letting my fingers slide down over my pussy; rubbing softly outside my panties. “It will make me so wet to see you in that!” (GOD – forced femme is so much fucking fun!!!!)

He couldn’t resist that sexy purr. His eyes were held fast by my fingers toying with my pussy lips through my panties. He sighed, and disappeared into my bedroom with the pretty box of pretty pink sexiness. In a few minutes, he stepped into the doorway of the living room, completely dressed in pink lace. His cock was practically pushing the panties almost off of it in the front he was so fucking rock hard! He looked humiliated, but that hard clitty in those panties betrayed his REAL feelings about it.

He loved it, and I knew it. I reversed our roles and made him model for me, oooh’ing and ahhhh’ing, telling him how very pretty and sexy my little panty boy was! That spurred him on to prance around, and I laughed again as he caught a look at himself in the full length mirror and stopped to turn around and around, admiring his own reflection. My forced femme was no longer forced, it seemed.

I patted the couch next to me, and he daintily sat down, asking me in a never-before-heard, soft little voice, “Do I look pretty Mommy?” Mommy?! Wow, this is going to be more fun than even I thought! I giggled and said “Yes baby, my little girl looks SO SO pretty! And guess what? Mommy has ANOTHER surprise for her little panty slut!” His eyes got wide as I pulled out my big fat pink dildo, all secured into my strap on harness. I was floored when his only reply to this sight was, “Can I keep my pretty panties on?“

But again, another story for another time. Stay tuned for more adventures with my naughty little panty bitch!