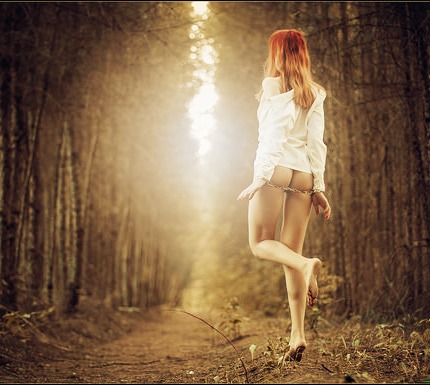 Ron and I spent the day hiking 2 clicks into the forest. We settled on a nice grassy spot that was hugged by trees. After diner we started fooling around by the fire. His lips seared mine hard and deep, my pussy was wet within seconds of us being entwined in one another we heard a sound.

Ron shrugged it off and continued you kiss down my torso. His lips felt like hot coals, I wanted more. By the time he got between my legs my head was swimming. I didn’t hear that the door to the tent was being unzipped. Ron stopped licking my pussy just before I came. He pushed his cock into my pussy and started to fuck me.

Five minutes later Ron laid next to me tied up.  I was told to lay still, if I moved Ron would be hurt. “So you couldn’t get your girl here off could ya son?” The mystery man said. “Well don’t you worry darlin’ I’ll take better care of you.” He said with a devilish chuckle. I was scared beyond belief, I stayed still and kept my eye’s on the black shadow. All I could remember is he smelled like pine.

His fingers found my pussy quickly. “Mmm yeah she’s still wet and ready for me. thanks for prepping her boy. I’m not much for eatin pussy once a cocks just been in it, you however will do the clean up. Can’t leave any evidence behind.”

With that, he pushed his much larger cock into my tight pussy. He was so thick and long. I felt guilty for moaning loud and even more guilty when my legs instinctively wrapped around his hard waist. He took up my hips and fucked me deep and hard. “That’s a good girl. See how she likes it? She likes a big cock fucking her, a real man knows what a woman wants.” He said.

My orgasm shot through me and came out it a gushing squirt. I had never squirted before. Ron squirmed to look away. I didn’t care how he must have felt humiliated. Mystery man dropped my hips and yoked Ron up and shoved his head down to my pussy. “Look at that! Your girl came on my cock in seconds.” Ron tried to pull away but the guy held him steady.

Ron refused but the guy threatened him and forced him to clean me out. My body responded to the licks and slurps. My body started to work into another orgasm. Before I knew it I came in Rons mouth.