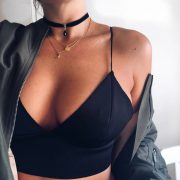 And it all started with one date.

I called an ex-boyfriend over. It seemed innocent, if slutty, to call a favored friends-with-benefits over for the night. After all, I had purposely stopped talking to the guy, Omari, because I couldn’t resist fucking him. Once he came over, things quickly devolved. It hadn’t even been five minutes and he was already pouring on the flirty comments. My boyfriend was invited to the show, too. During the whole dinner date, he sat quietly in the living room watching the television. He could hear every flirty comment and remark, and how I didn’t shut any of it down. I could hear the steam pour out of his ears from the next room over. Jealous little fucker had no clue that I’d brought Omari over for him, not for myself.

After I let him steam in his own jealousy for an hour, I invited them both into the same room. We sat around by the television for quite a while, until I decided to go over and blatantly sit on Omari’s lap. Then, I swear my boyfriend saw stars – he piped up, protesting how much of a slut I was being. I let my mean streak out and stood back up, walking over and dragging him over towards Omari. After the little power move, I pushed him down on his knees and stared him down as I spoke. “Fine. If you don’t want me on his lap, then YOU finish him off.”

He stared at me blankly.