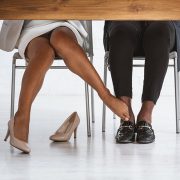 Foot job fun during Thanksgiving has always been a thing between my uncle and me at the table.  Of course, things were a lot more innocent back in the day when I was younger.  Because of how big my family is compared to how small the table was, we would sometimes have to fight for leg space, and Uncle and I turned into a kind of game.  With him being bigger and stronger, he’d only let me think I was winning long enough for him to crush me in the end.

I’m sick of losing, though.  I want to beat him for once.  That little girl is in the past.  I’m sure he will realize that when he sees me in my form-fitting, low-cut dress.  The 34 F tits were definitely a new addition.  I’d also learned a thing or two about seduction, which he was about to witness.

It starts during the prayer.  With everyone’s head bowed, I can feel my uncle’s knee press against mine.  With a grin, I knock his leg to one side.  He comes at me with his other knee, but it swiftly moves to the other.  That leaves him wide open for my ‘attack’, for between his legs is a comfortable spot for me to plant my foot.  I kick my shoe off and let my foot flop right in between his legs.

I’m surprised it only occurred to me now.  However, I’m not the only thing in need of space.  When I place my foot comfortably up on the chair, I can feel something growing against the sole of my barefoot.  I can’t believe it!  Uncle Dick has a hardon!

Only room enough for one

Was this his way of fighting back?  Obviously, he’d have to be some sick pervert to be getting off to his niece’s foot against his crotch.  This was obviously a warfare tactic.  Well, I wasn’t about to let him win this year either.  I definitely wasn’t going to let his cock be the victor.  I’d make sure it couldn’t push me out at all.  So, I do the only thing I can.

With all heads still bowed, my toes start to play with him.  They are quite nimble.  I can unzip his pants with them.  From there, his sticky pre-cum coats my toes as I rub his cock with my foot.  Even though it is icky, I am still set on winning.  However, this is turning into a two-foot job.

Up and down, I pump Uncle Dick’s cock with my feet.  They squeeze and grip it harder and harder, and I can tell that I am winning.  He starts squirming in his seat like a child, trying desperately to last, but I”m not going to let him win.  I work faster and faster with my foot job.  I don’t even realize that the speed was making my tits jiggle, offering uncle Dick quite the view while I attempt to wring his cock dry.  Finally, it becomes too much for Uncle Dick.

Uncle Dick’s hot, sticky Thanksgiving load sprays all over my toes and even hits the underside of the table.  He makes such a mess of them.  What a shame.  My lovely pedicure is ruined now by incest jizz.  The good news is that I did manage to keep the spot!  For a while, anyway.  Somewhere between cutting the second ham, Uncle Dick gets ready for round two.  A well-timed drop of my fork allows me to make sure his cock has no third wind lurking in his nut sack.  I suck his sauce down and make sure to swallow.  I am the victor from now on.  Now, it’s not even a competition.

Have any family fun encounters you want to talk about?  Call my phone sex line and let me know.