Food Fun: A Slab of Meat for his Man Meat! 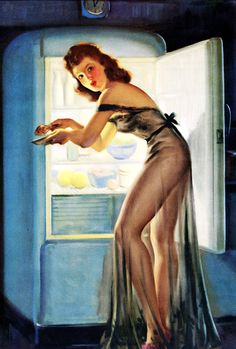 Have you ever used food as a sex toy?

My lover Abe invited me over one night to watch a movie and drink some beer.  But I really wanted food.

“I have food here!  I’ll whip something up for you.  Come on… please come over.  I miss you.”  he pleaded with his sexy and irresistible voice.

I went straight over there and he handed me a beer as soon as I walked in the door.

“Oh, right.  Food first.  Come, let’s see what’s in the fridge.” I followed him into the kitchen.

I opened his fridge and immediately punched his arm.

“Hey! What was that for?” he said, rubbing his arm where I punched him.  “Damn, you’re stronger than I thought.” he mumbled.

“There’s plenty to eat.” he insisted, defensively.  He picked up a package of thick sliced deli ham and handed it to me.  I checked the expiration date but it was fine.

He pulled out a can of whipped cream and shook it.  It sounded full.

“Why do you even have whipped cream?” I asked.

“I think they were on sale.  I bought one and got one free.” he said proudly.  I rolled my eyes at him.  He pulled out the third and last item that was in the fridge: a tub of margarine.

“Ham, whipped cream and margarine.  That really does sound like a feast to drool over, Abe.  Is there anything in your cupboard?”  I knew the answer before I opened them.  Empty except for a can of pork and beans.

“That was here when I moved in…” he explained.

I put my hands on my hips.  “Okay, listen.  I’m going to the bathroom and when I come out, I want you to be on the phone with the pizza place down the street ordering a big and delicious pepperoni pizza with extra cheese.  Got it? If I don’t get food soon, I’m leaving and you get no pussy tonight.”

He clicked his heels together and gave me a very exaggerated salute and shouted, “YES! MA’AM!”

When I came out of the bathroom (which had no soap in it), he was standing in his kitchen naked.  He smiled at me.  “I called them.  They’ll be here in 30 minutes or less!” he said.  He walked up to me and put his arms around me.  “Now… let’s have some fun, baby.”

“I’m too hungry to fuck, Abe!” I said in an almost whiny voice.  “We’ll fuck after I get some food in my belly.”

“Have some of that ham!” he insisted, opening the package.  He pulled out a slice of ham and kind of waved it at me.

I laughed at him.  “Don’t wave food at me like that.  What am I, a dog?” I held my hand out so that he can hand it to me.  He glanced at my hand and then at the slice of ham and promptly wrapped the slice around his cock.  He jumped a little when he did it.

I laughed at his silly antics.  “I don’t think so.” I said, walking over to him.  I put my hand over his and squeezed the ham slice around his cock a little harder.  He chuckled and thrust his hips out toward me a little.  I continued to stroke the ham slice up and down his cock.

He laughed.  “It looks like white, fluffy pubic hair.”

I grabbed the tub of margarine and dipped my middle finger into it, pulling out a thick glob.  I climbed up on the kitchen table and spread my legs open.  “Dessert before dinner.” I said pointing to my white creamy vanilla flavored pubic hair.  He began to lower his head but I stopped him.

“Climb on top of me.  69 position.”  I ordered.  He climbed up quickly and when his ass was hovering over my face and his hard ham-smelling dick was dangling in front of me, I slid my middle finger, covered in margarine straight into his asshole.

“Wow! Fuck!” he cried as he moaned in delight.  He began to slurp the cream off of my pussy and when it was all gone, he continued to push his tongue into my wet hole.  I jammed my finger in and out of his ass and grabbed his cock, stroking it quickly and firmly.

It didn’t take long before he told me he was about to release his own cream load.  He backed up, allowing me to put his cock into my mouth and I caught the hot sperm as it splashed into my mouth and down my throat.

As we got dressed again, he said.  “Well, you can’t say that I didn’t feed you.”

“Yeah… and it was much tastier than that ham would would have been.”  I said.