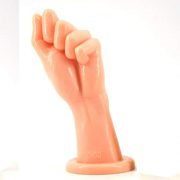 He looked so nervous and I made it worse by telling him it would feel great to have my big fist filling his ass. I grabbed his arm and laughed as I dragged him to the bedroom then made him get naked. I got the lube and made him get down on all fours as I put it on my hand. So I was so excited I couldn’t stop smiling as I got behind him and spread his cheeks open, getting a good look at his puckered little hole.

Even that was enough to make him move away from me. I gave his ass a hard smack as I told him to keep still.

I could feel him shaking as I rubbed a finger over his hole and started pushing against it, slowly making my way inside. He squeezed his hole shut, trying to keep me out and it took ages for me to get in up to my knuckle. I wiggled it around then started sliding it in and out of him. He gasped and whimpered as I stroked his hole. When I pushed in a second finger I thought he was going to die.

I had to rub his lower back as I moved my fingers in him. Scissoring them as he slowly loosened up. I had no idea how he was going to handle my whole fist if he was being such a baby about two fingers. Then I kept going until he was as loose as he was going to get then lubed up my fist. I folded my hand up and held my fingers against his hole. Pushing slowly into him as I leaned on his back with my arm so he couldn’t move.

He cried out and shook as his hole stretched even wider and my fist worked its way into him.

He felt so tight and he clenched around me as I kept going. When I was all the way in I gave him a minute to get used to it. Then gave him a light thrust. He groaned but took it, okay so I did it again harder, giving his ass little jabs.