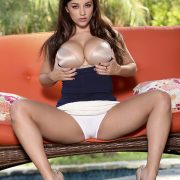 It all started with a simple ad posting, then I started receiving calls and emails left and right. I had so many responses to the ad that it was hard to keep up with them all. Of course, I tried my best to respond to each guy and to the best of my knowledge, decipher between them all and figure out who truly needed me. I knew that meeting with all of them would be impossible so I tried to make sure that I was meeting with those who needed me most. My first lesson was with a guy named Brandon who surprised me when we met. He was not only handsome and curious, he was a virgin with a huge cock and anxious to do anything that I said. Brandon was the ideal student for my first time sex education lessons.

He was very sweet and shy and it just made him even more adorable.

After having him masturbate for a while, I couldn’t hold back any longer, I started playing with my pussy as I watched him. I just slid my hand in my panties, I didn’t get naked just then. Once I realized how turned on I actually was I decided it was time to test his tongue. It was time to show, Brandon, how good he could make me feel using nothing but his tongue. I made him get down on his knees in front of me and I let my robe fall to the floor. Brandon was anxious to find out what was next. I made him slide my panties off as I took off my bra.

As I lifted my leg over his shoulder, I grabbed the back of his head and pulled him to my pussy.

I laid back on the bed and spread my legs. Then I grabbed Brandon by his hand and pulled him around in front of me and between my legs. That’s when I grabbed his hard cock and began rubbing it up and down between my pussy lips. He looked at me and smiled. Then I told him to slide it in me. he did as he was told, but that was all I had to say. Before I knew it he was stroking his cock in and out of my pussy and rubbing against my g-spot in the best way. As I felt myself start to cum, I felt Brandon filling me up at the same time. I never knew that first time sex education lessons would be this great!