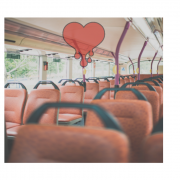 I had to have her! I wasn’t usually into chicks, but I’d make her my first lesbian date!  Every day she got on the bus at 81st street and Broadway and rode the bus to 42nd Street.  She was so voluptuous!  I wonder if she can feel me staring at her?  She was tall but not too tall, and she was phat in all the right places.  She almost looked like the girl I called for phone sex every Wednesday.  It could be her, but she is just so beautiful!

I finally got my chance to tell her how I felt and show her the ecstasy I had been yearning to show her for months.  The bus was packed, and she got on at her usual stop.  I jumped up and offered her my seat.  She made eye contact with me and thanked me for my act of chivalry.  As I stood next to her, I could feel her trying not to stare at the bulge in my pants.  When it was time for her to get off the bus, I tapped her on the shoulder.  “Your stop is next, right?”  She nodded, and I continued, “I was hoping that I could buy you a cup of coffee before you get to your next destination.”

My heart is pounding, and my stomach was in knots as I waited for her reply.  “I would like that,” she said as she signaled the bus driver that this was her stop.  After exiting the bus, we were able to find a local coffee shop.  She liked her coffee black with a splash of coconut milk and a squirt of honey.   We talked for hours, and finally, I got her to agree to a second encounter!  We were going on a real date in one week.  Is this too good to be true?  All I kept thinking was, “But she is just so beautiful!”

Finally, the day came for our first lesbian date.  We decided that we would meet on the bus and go from there.  I had everything planned out; breakfast, a museum tour, and then lunch at my place.   Today was going to be the day.   When she got on the bus, all my emotions rose to the surface, causing me to tingle in all the right places.  Now I was staring at her, but it did not seem so wrong.  Everything when on as planned; I was having fun, and she seemed to be having fun.

We were finally at my place, tasting the remnants of lunch on each other’s lips.  Every moment seemed to get hotter and hotter.  She allowed me to remove her blouse to expose her full triple D’s that seemed to be so happy to be released from the cage of the bra.  I tried to touch her pussy by moving my hand up her leg over the silky pantyhose she was wearing, but she kept moving my hand away.  After trying a few times, I confirmed that she really wanted to go to the next step.  She smiled and nodded with anticipation, ensuring that she felt all the same sensations that I was feeling.

Is it really gonna happen?

She peaked out of the bathroom and asked me to close my eyes.  Once again, I fulfilled her request.  I could hear her slowly move towards the bed.  Then she began stroking my fake cock and finally, she put her mouth on me!  Her mouth was warm, wet, and wide;  she was able to take all of my cock as I could hear her gagging on it.  I was so close to the explosion feeling like the end of the firework display on the Fourth of July, but I wanted to return the favor.  She kept pushing me back down on the bed, not allowing me to flip her over. My stap-on tugged and rubbed against my clit, and it felt amazing!

I thought I would give her a string of pearls, but she stopped sucking and stroking me.  I opened my eye, and she was on all fours looking back at me.  “Take me from behind,” she said.  I got onto my knees and began to enter the first opening I felt.  Of course, I thought that  I was fucking pussy.  I could get my cock in with ease; it was tight but not too tight, and so moist, like pussy.  I could not believe that she was so wet for me just from sucking my cock.  But she is just so beautiful, and I did not even get to show her my pussy-licking skills.

Nevertheless, I was stroking harder and deeper, then faster and faster.  I reached around her body to caress her plump breast.  I had a breast in one hand, and then I started to slide the other hand down to touch her pussy.  When I reached the area where I thought her pussy SHOULD be, I felt something strange.  When I say strange, I mean I felt a hard cock as big as mine or bigger and two balls.  I fell back on the bed and turned on the lamp.  What the fuck is going on here?  She fell off the bed onto her back, and then I could see it clearly in the light.  She had a DICK!  A big dick and two balls and big ass tits.

What just happened? I thought I had my first lesbian date…

Before I got an explanation, she grabbed her clothes and ran out of my apartment.  I looked for “her” in the days and weeks following the incident, but she did not get on at her usual stop.  Did my eyes deceive me, or was I really fucking a man?  All I wanted was an explanation.  But she was just so beautiful!  Is there anyone I can tell?  Maybe I can call my main girl Rachelle at Phone Sex Kingdom and get her advice.