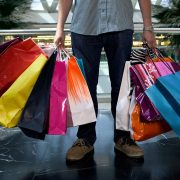 Paypig joins me on a findom shopping spree.

God, you are so lucky I actually let you come this time! Remember last time when I stood you up and told you I went shopping without you? Hahaha, well you’re here now so let’s go on our findom shopping spree. Maybe later I’ll let you call a phone sex operator to get off, if you behave!

We hit an upscale lingerie boutique first. They bring us flutes filled with mimosas as we browse the tastefully decorated store. It’s early still so I bide my time, only half looking at the delicious little bits of fabric.

“Every time we go on a findom shopping spree it reminds me of the first time we met. You’re my first convert, you know that? I know you thought you were going to be a sugar daddy for the sexiest, sluttiest girl around, but I’m quite proud of how you turned out. Now, shall we begin?”

I dive in, luxuriating in the soft lingerie. A lacy red one-piece catches my attention and I gush over the quality. You go to reach for it and I recoil, saving it from your disgusting touch.

“What the fuck do you think you’re doing?” I whisper.

Your eyes dart back and forth as you try to think of something that won’t leave you completely cut off from what little money I allow you to keep. Now, who’s imagining the past? I watch as the memory plays out in your mind: the first time you tried to lay claim to money you’d already promised me.

Much like today, I was fawning over a delicious little number made of silk when you came over and jarred it out of my hands. I was instantly furious. For years, watching the necklace scene in Pretty Woman had filled me with rage, so when I say I was furious, I mean furious. It was the moment that sealed your fate, honestly. I was content with having a Sugar Daddy until that moment. But at that moment, I knew I truly was better than you.

When you snatched a $1,800 red Mulberry silk negligee out of my hands like you were squabbling over a bargain bin deal, I knew how truly pathetic you were.

~I really don’t mind taking a break from our findom shopping spree to watch you agonize over your life choices. Deep in your pants, I bet your chastity device is about to fall off. Your cock always shrivels up when you imagine life before your Goddess. ~

“What the fuck do you think you’re doing? That was mine. Now it’s ruined and I’m probably going to be banned for life!” I whisper. I stared at you accusingly and watched you turn into a chastised toddler.

“It’s a fucking nightgown, who cares? I’m just going to peel it off of you later isn’t that what I’m paying for?”

I looked you up and down, getting a clearer picture of what a sensitive pussy you were. We stood there in a deadlock for a few seconds before I gestured to a salesman.

“Excuse me, I’m not sure if this can be salvaged, but if not, he will pay for it.”

And pay for it you did. It still hangs in my closet, to be brought out when you misbehave. It’s why we’re here on our umteenth findom shopping spree…

But, god you were so mad!

We walked out of the store in a war for dominance. You had driven me there, so I hopped back into your car, slamming the door. I tenderly put the lingerie in the back seat and then prepared for battle. I let you talk first, mostly because it didn’t matter, but also because it kept you distracted.

“We are so done. Do you know how humiliating that was?! And $2k for a fucking nightgown. You’re probably a good lay, but not that good.”

Right as you finished your sentence, I unzipped your pants.

I trailed my finger down the length of your dick, making little patterns as I spoke.

“You treat things and people like they’re toys. No. less than toys. You treat them like they only exist because you’ve willed them into existence. The fact that you had the audacity to claim to be the humiliated party speaks volumes. And the fact that you viewed the nightie as a means to an end…well, that just makes me furious.

I squeezed your cock, hard.

From Sugar Daddy to Paypig

“And now you’ll never know what this pussy feels like. But that doesn’t mean I’m done with you!”

With my fingernails digging into his cock, I lifted his shirt over his head. I slid onto his lap, grabbing the bag from the back seat as I got situated.

I raked my fingers across the length of your cock.

“Oh my god! Look at you in your naughty sissy lingerie! You’re actually harder than when we started! Like…rock hard! Holy shit, you really are a little beta sissy, aren’t you? I can’t believe a fucking perverted bitch boy thought he deserved to manhandle me. I don’t fucking think so!”