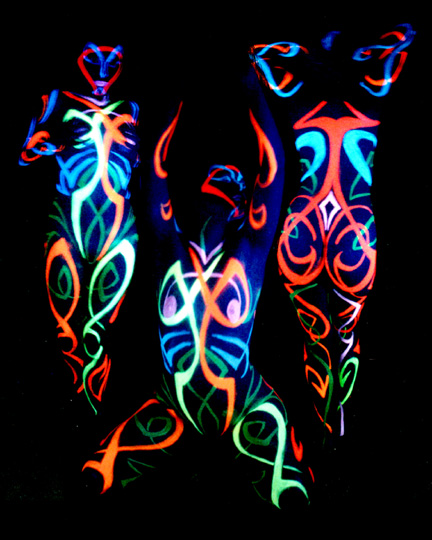 I love giving my fiancé little treats and showing him how lucky he is to have me, so this past weekend I took him to a day-glo UV paint party a friend of mine was throwing, with loads of college age kids. When we arrived everyone was in swim trunks and bikinis and the whole place was already covered in bright pink, orange blue and green luminous paint. I threw myself straight in and soon found myself in the middle of a super sexy three way kiss with two hot college girls on the dance floor. I looked over and could see my fiancé sitting in the corner with a miserable expression on his face. “Would you do me a favor?” I asked one of the girls, a tall slim brunette with huge tits and a perfect little round ass. “Sure!” she replied, swaying from side to side slightly, (I could tell they were both hammered, my favorite!) “Go over to that guy and make him get his cock out, he looks so sad!” I said gesturing to the sour faced fiancé. She made her way sexily over to him, her ass looked so good in her tiny black bikini and I was getting pretty wet at the thought of fucking her. “Where’s she going?” the other girl asked me, a petite blonde with huge innocent looking blue eyes and small, perfectly pert and perky tits. “I think she likes that guy.” I say, and when I looked over the brunette was straddling my fiace and hungrily making out with him, covering his face and body in day-glo paint. I watched her slide her hand down to his zipper and begin to fondle his big cock through his jeans, I could tell he had a huge hard on and it turned me on so much watching this beautiful college babe grabbing at it while she shoved her tongue down his throat.

“I’m not letting her have all the fun!” the blonde shouted and made her way over to them, tapping the brunette on the shoulder “Aren’t you going to introduce me Kelly?” She said, jutting out her hip placing her hand on it seductively. “Oh sorry, this is erm, what is your name?” She said embarrassedly, turning to my fiance. “Oh, I’m Norman.” He said and looked over at me watching, I licked my lips and give him a nod of approval. “I feel left out, I wanna play too!” the blonde said, pouting in feigned disappointment. “You can play.” Said Norman, reaching out and pulling her towards him. “I think we should all kiss!” said the brunette and they all gave each other a long wet three way kiss.

I walked up behind them and cheekily pulled the strings on the back of both of their bikinis, undoing making their tits fall out onto Norman’s chest. “I think we should all go somewhere a little more private.” I whisper, and take both girls by the hand and lead all three of them to a nearby bedroom.

I sat Norman on the edge of the bed and ordered the girls to strip, which they did, willingly. “I want to see which of you girls is better at sucking dick” I said and watched as the brunette took the lead and got on all fours in front of Norman, looking him right in the eye as she slowly unzipped his pants and let his rock hard cock spring out of his fly. I watched her eyes widen when she saw how big and thick his veiny dick was, and she immediately gobbled it up, sucking the bulbous end like a pacifier as she held his eye. The blonde was feeling left out so she stumbled over and got on her knees next to the brunette and opened her mouth wide, sticking her tongue out as far as she could. The brunette took his dick out of her mouth and held the shaft, angling it into the blonde’s mouth.

I was so wet and turned on from watching them I decided to take charge. “Sit on his dick.” I said, grabbing the brunette by the hair and dragging her up until she was positioned on top of Norman with her tits on his chest. I grabbed his throbbing cock with one hand and with the other held her ass cheeks apart as she lowered herself onto him and I watched her hungry pussy devour the length of his dick, all the way to the base.

She began bucking and grinding her hips ferociously up and down, so I sat back and watched for a minute, before grabbing the blonde by the face and bringing it close to mine “What are you going to do now bitch?” I said, squeezing her face so hard it forced her mouth open. I gathered some thick spit and hocked it into her mouth. “Swallow it. Then suck his balls while she fucks him.” I dragged her over to Norman and the brunette and force her head down to his balls. She sucked hungrily on them and stuffed them both inside her mouth while the brunette bounced frenziedly on Norman thick member.

Don’t ever say I’m not the best girlfriend! 😛