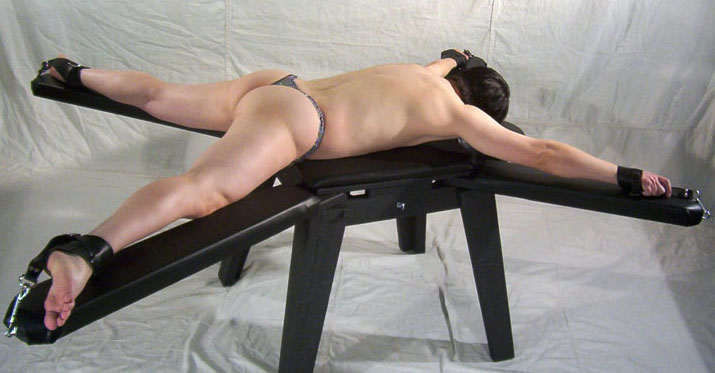 After about two hours I had a sturdy but ugly and splintery St. Andrew’s cross. I dragged it over to the area of my playroom where there are pulleys secured to the ceiling and practiced hoisting it with sandbags on it for weight…It was hard, But completely doable.

I hoisted it up so that it worked like a table and mimicked the stroke of my cane until I got it to the perfect height. Then I put a mark on the rope so I’d be able to conveniently move it to that position. Next, I released the ropes from all of the hoops, except for the top two, and pulled until it was fully suspended.

I intended to really get into my fetish tonight!

With the sandbags still clipped to it, I brought out my thin rattan cane and started striking at different areas as hard as I could. I loved how little the cross was swinging so I decided to move on to setting up and picking out anything I wanted to use.

I brought my table over next to the cross and then I went over to my treasure chest of pain. Then I started with the tower of pain. Nipple clamps pull a man’s nipples towards each other. Then I pulled out something that looks like a metal pipe with hinges down the length on one side. When you open it, there are long absurdly thin spikes on the top half. It’s an intensely motivating device for a fetish freak hahaha.

Next were the impact toys: my cane, flogger, whip, and a second special homemade flogger made for light maiming. It is made of cowhide and at the end of each lash was a sharp tiny piece of stainless steel.

Scott had no idea what he was in for! Call me for some phone sex tonight to hear a little more!