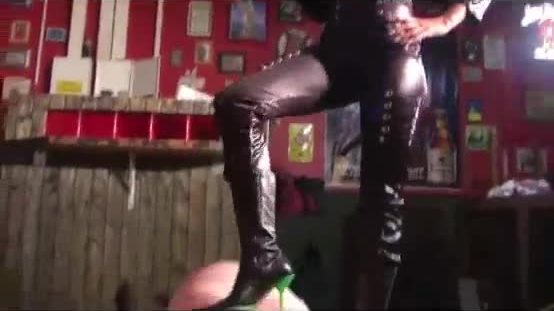 “I have a present for you” as she smiled.

The bulb was placed inside my mouth. She slowly inflated the bulb. My mouth began to stretch. She continued to inflate the bulb till my mouth could not stretch any further.

With me silenced once again, a pair of scissors was used to free me from the plastic wrap and tape. I was ordered to stand up and lean over the table by the wall.

I could hear my Mistress Dawn pulling on rubber gloves.

A cool ointment was applied to my anus. First, she inserted one finger, then two. She worked the two fingers in and out for a while.

Then then I felt the third finger go in. I arched my back to escape the invading fingers but to no avail. With a sudden jerk, she pulled all her fingers out at once, at the same time I heard a loud pop.

With one swift motion, she picked up a vibrating butt plug and shoved up my ass. It burned as my sphincter muscle was stretched to its limit.

I groaned, but no sound could escape the inflated rubber bulb.

I was told to stand at the foot of the bed. My Mistress Dawn left the room and reappeared with a one-piece rubber garment.

It had an attached hood with tubes at the nose holes. It also had mouth and eye openings. The garment was wide at the shoulders and narrow at the feet.

She unzipped the garment, the zipper went from the top of the head to the middle of the back. An additional zipper was on the front of the garment right at the crotch.

I was told to step into the garment.

As I did, she guides my arms into sleeves that were on the inside of the garment. The garment was pulled up to my shoulders.

She zipped up the garment stopping at the back of my neck. The rubber gag in my mouth was then deflated and removed.

The rubber hood was then pulled over my face and the rest of the zipper was zipped shut. I could see myself in the wall mirror.

I looked like a shiny black mummy. Then she undid my crotch zipper and pulled out the battery pack for the butt plug. With that out, the zipper was closed up again.

I was then pushed over. I feel to the center of the bed with my face towards the ceiling.

The vibrating butt plug was turned on.

As she shut the door my body exploded with pleasure. I could not take it anymore.

Want to be used and abused? or hear more?