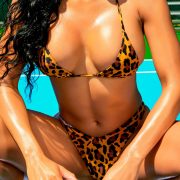 Sometimes, there’s nothing I love better than just using a guy, and that’s what my femdom fetish provides for me. It allows me to shove a guy down on his back. Then, I tie up his hands, so he can’t use them. That makes him vulnerable for me to shove a cock ring on his dick. His cock is there for me, not for him, and he isn’t going to come until I say so. I want to be sure of it, and I’ve never met a man I could trust not to nut right away, not after I finish doing what I’m planning.

So with his hands tied up and a ring on his cock, I crawl over him and sit on his face. Usually, a guy thrashes under me at first. It might be that he’s not prepared, or he’s way too interested. I don’t move, letting him twist and twitch, not speaking, letting him figure out exactly what it is he’s there to do. Once he figures out his job is to eat me out, I pat his head and pull out my phone- those candies aren’t going to crush themselves.

I love feeling his chest heave as he struggles for breath, feeling his muscles expand and contract underneath my red-nailed fingertips. By that point, he’s probably drowning in my juices, swallowing anything just to get some air.

Eventually, he gets the idea.