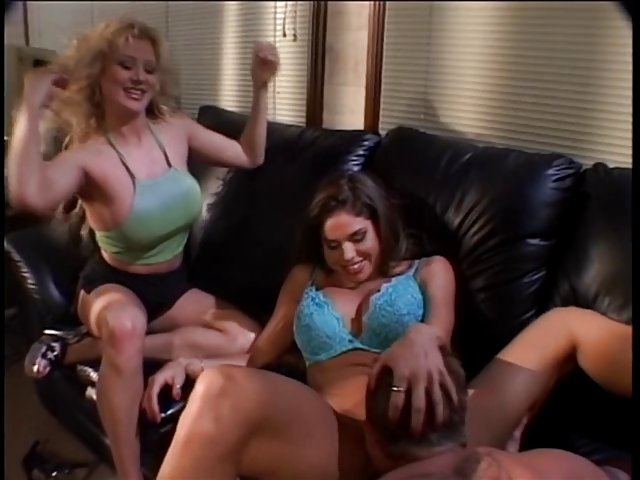 It started with one of my guy friends, Charles, eating me out during the first game of the season. He was doing great until his team started to score. Then he got distracted and his performance started lacking. Being the BITCH that I am, I couldn’t let that go unpunished!

I suggested a new game: all-season, whenever we’d watch the football game, I would be able to watch and he had to eat me out instead. He would score points for orgasms, and lose points for distraction and poor performance. In fact, I thought that was such a good idea, I told a few friends about it to see if they wanted to join.

Three of my sexy football-loving girlfriends agreed, and I found us another three male contestants. Jen, Steph, Amber, and I were all excited for the next game.

We met up at my house for the second game. All of us girls were in short skirts . . . and we made sure to leave our panties at home, of course.

Rob, Dan, Greg, and Charles arrived late. Apparently, they’d carpooled . . . slutever, no excuse!
“Sorry boys, lateness also counts against you, we should NEVER be kept waiting!” I said, flashing my most evil succubus-style grin.
“You all lose a point, and yes you can go into the negative!” Jen scolded, making the rest of the girls laugh.

Now that there were challengers we needed a prize for the winner and, of course, punishment for the losers. My girlfriends and I conferred and decided that the winner would get the amazing pleasure of doing whatever he wanted to all of us babes during the super bowl party, and that the losers, would have the ultimate displeasure of being forced to come dressed as, and act like, babies . . . diaper and all.

We laid out the terms and got ready for the game. I had a couch big enough for all four of us girls, and the boys had to be on their knees in front of us.
“Assume the position boys!” Steph said, winking at me.

Dan started using his fingers on Jen’s clit, and stuck his tongue deep inside her. She thrust her hips forward, forcing Dan’s tongue further inside. Tensed up her whole body, and moaned in pleasure. She relaxed but then tensed up again, moaning louder. Then her body relaxed again and she said “Whew, Dan, 2 points!”

Greg apparently wasn’t up to par because Amber shouted, “Step it up GREG, Minus 1 point!”

Naturally, we rotated the boys every game of the season. Rob and Dan were ahead for a few games, but for a while Charles and Greg started making a comeback. I think Dan got too distracted as we got closer to the super bowl and lost a bunch of points due to his sex-addled brain’s inability to focus. He didn’t pay enough attention to the pussy in front of him! I mean really, how hard is it??

Rob just didn’t have the stamina to eat that much pussy. In the end, Charles and Greg were tied. We had one more game before the super bowl party, so we made each of them eat out of two of us! Greg started strong, but ultimately, as the baby, he would soon have to be, got a ‘tongue cramp’ and tapped out early. Charles gave the performance of a lifetime, lapping up pussy juice left and right, his fingers and tongue trained for this, and he expertly, fucked both Jen and me till we came multiple times.

We had our male slut winner!