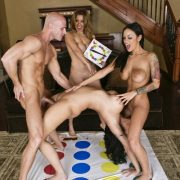 My family is a close one. Very close. Some think maybe too close. And, we just adore a good Fantasy Family Fun Fuck. Who had to stay at home to have fun? Tonight, our game night started like any other and respectfully speaking, I was bored, bored, BORED! That’s when Dad said this Fantasy Family Fun Fuck was going to have a slight change to it. We were going to play a good game of, “Twister”. Wow. Really? Twister? That old-school game from the old days? What we didn’t grasp (at least not yet) was that this Twister game would involve the entire family, fucking, sucking, plunging, moaning and squirting all over the family room! Whoot for another fantasy family fun fuck!

Dad laid out the Twister mat from the box. You know, the large, white, plastic tarp-looking “game board” with large colored polka dots placed randomly on it? He explained the rules as, “Unlike regular Twister, when you fall, or “lose”, you aren’t out. But, you do have to remove an article of clothing!” So, kind of like a filthy version of Strip Twister? Nice concept. Wicked Grin.

There were eight of us including my younger cousin Darren. There was Mom, Dad, my older sister, Terry, middle sister, Laura and Darren’s Mom, and Dad, Aunt Margo and Uncle Dan. I was wearing my tennis shorts and a racerback tee. Mom had on a house dress and I could tell she had no bra reigning in her pendulous tits. This was going to be a treat! Yum. Mommy’s large dangling teets, smothering my face. I’d been lapping at those puppies since birth! I’m 18 now and I can’t go long without my dairy from Mommy. Mmmmm.

Dad was wearing his chinos, pulled way too high for his ankle’s sake and the rest of the adults and kids were similarly dressed. But, that wouldn’t much matter in a little while. Aunt Margo was nearly 60, but still in remarkably good shape. She taught Pilates at some country club nearby. Her size 6 jeans hugged her in all the right places and held tight around her plump pussy. She has a beautiful camel-toe on her! What? Never had I seen her naked pussy before. But, I could see the outline of that fat fucker right there! I could see why Uncle Dan was happily glued to her side everywhere they went. Unlike Mom and Dad, who until tonight, I’d thought had foregone fucking as a punishment. Who knew? Still, waters do indeed run deep!

Who chooses the Fantasy Family Fun Fuck? We do, that’s who!

Mom was the sexy, self-appointed dial spinner/keeper and she twirled that thing for all it was worth. She did it like it was a roulette wheel on the Vegas Strip! LOL “Right hand, red!” She giggled out and everyone scrambled over each other trying to follow the instructions before the colored circles ran out. Keep in mind, there are rows of six dots of each color, green, yellow, blue and red. So, simple math tells you that there’s no way eight people can play and have everyone get that “Right hand on red”. Got it?

And, just like that, Terry and Uncle Dan were out of the game! They had to strip off a piece of clothing. Uncle Dan chose his pants because he knew he was going commando. And Terry chose her top because she knew she was braless. Uncle Dan only had to peep Terry’s 20-year-old tits and he was licking his chops; his cock went stock still and stiff as the proverbial board. Truthfully, every male in the room was salivating; and more than half of the women.

Sometimes, a Fantasy Family Fun Fuck can get you in a tangle. A tangle of bodies!

My family loved in a very different way starting that night.

However, I think we could call that game a tie. And, we were all winners. A few sisters and cousins are now pregnant. But, as they say, you’ve got to pay to play!

We still have fantasy family fun fuck, and these days the whole family lives within blocks of one another. So, we’re kind of “on-call” for all the “in-between game times”. You never know when your family will be needed. We have more fun than you could imagine. Don’t think so? If you think your clan is wilder than mine, call me and let’s compare fantasy family fun stories! Let’s have an incest phone sex chat about some not-so-childlike fantasies.