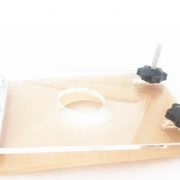 but there are a lot of other reasons to love it too. From the outside, it probably appears as if you don’t enjoy yourself too but we both know that’s a lie. It’s not that you don’t feel pain or that you’re not completely uncomfortable and squirming beneath my fingers, it’s that you know that that’s exactly what you deserve, and this is exactly where you belong. Isn’t that right?

That brings you peace of mind you rarely get to experience in your daily life. Even if it does come at an extraordinary cost. it’s a price you’re willing to pay. And a toll that I’m more than willing to collect. The sadist in me loves every single second of your pain. It’s not very often that I get to abuse a nice thick cock though. Normally it’s a tiny pathetic disgusting prick that I get to torture.

Which is fine by me. Those dirty little dicks deserve as much torture as the next and they get me just as wet as a thick juicy cock when it comes to extreme CBT torment. When a member of the Itty Bitty Clitty Committee calls for their favorite fetish phone sex I view it as the ultimate chance to not only put them in their place but also make them pay for all of the disappointed women they’ve left in their wake.

It reminds me of the first time I ever encountered a true micropenis and how I got revenge on his deception.

Andy was a sweet, intelligent, if not overweight grad student that I’d known casually for years. We got along great and I found his lack of ego charming. But it was a trap! The stereotype of overcompensating with machismo didn’t apply to him and is what led to me be massively disappointed that night.

He came up to my dorm and we chatted for a while, mostly just eying each other like juicy steaks. A few flirtatious comments and a toe-curling kiss later, and I was tugging at his belt.

All of a sudden he pumped the breaks, insisting he spends some time going down on me first. I’m not a masochist, so of course, I hopped up on that bed and spread my legs like a diligent little slut. He had one of the most wicked tongues I’d ever enjoyed! It flicked and lingered in all of the right places, making my eyes roll back into my skull as he forced orgasm after orgasm out of me.

When I was completely drenched and ready to be skewered, I made my move. Sitting up, I leaned forward, grabbing his pants right where one would expect a cock. Except there was nothing to grab. He immediately hopped backward off of the bed, trying to leave before I could do so much as laugh.

I won’t lie, I may have overreacted to his retreat. He was opening the dorm room door when I grabbed the closest thing I could find and chucked it at his head. It was an alarm clock and it laid him out flat and cold.

While he was out I got to the bottom of the issue. His pants came off easily and I could see why he’d bolted. He was worse than my pathetic submissive professor. Between his legs was a second belly button. Or was it a dick? I’m not sure what qualifies, honestly. It was less than an inch when flaccid. I later found out that when aroused it’s closer to 3.5…like it mattered!

Using my stockings to bind his hands and feet to each corner of the bed, I secured him. Then I grabbed my sounding rods, ball crushers, and piano wire. I hadn’t been planning on any kinky fun, just a delicious hookup with someone I genuinely enjoyed. But I was always prepared, especially on my home turf!

It was time to wake him and experience some extreme CBT torment, so I started applying the plexiglass ball crushers. With every turn of the screw, he woke a little bit more…

Relive the moment with me!

Call me and let’s have some wicked fun! You can be Andy and I’ll show you what happened next!