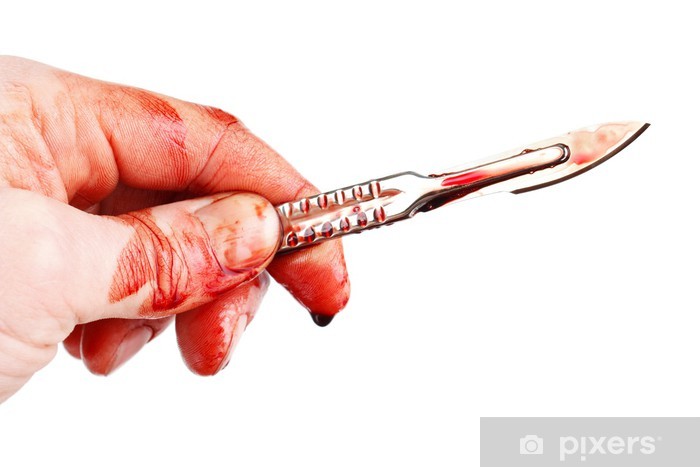 Some guys deserve an extreme castration punishment, Jon was one of those guys. My daughter came home one day crying about how Jon was cheating on her with multiple girls. She was so in love with him and devastated. The mama bear in me came out in full force. And how does a mama bear deal with someone messing with her cubs? Well, it ends in a bloody mess and that’s exactly what I planned for this two-timing asshole. I was about to teach Jon a lesson he would never, ever forget. His extreme castration punishment is sure to leave a lasting impression on him and I don’t think he’ll be hurting sweet innocent girls ever again!

So, my daughter lured him over to the house. She told him that she would be alone all weekend and they could fuck all over the house. He came over right away and told his family that he would be away all weekend. Perfect! That’s about how long I had set aside for his extreme castration punishment.

My daughter opened the door for him and as soon as he walked in, I came from behind and put a bag over his head. He panicked but was disoriented. That’s when my daughter punched him hard in the stomach. “That’s for cheating on me!” she yelled at him. As he tried to recover, I took that opportunity to zip tie his wrists together then his ankles. Now he was completely under our control and he was about to pay for his misdeeds.

We got him down to the basement and strapped him to a table. He looked ready for his extreme castration punishment! I took the bag off his head but he just yelled and called us bitches so I put duct tape over his mouth to muffle the sound. My daughter filled him in, he was about to get the ultimate punishment for his cheating ways. Then she took off the tape from his mouth hoping for a desperate apology. Instead, he called us cunts and every horrible name he could think of. Any chance he had of getting out of this was completely gone…

I wanted to torture him all weekend but he really pissed me off with his dirty, nasty name-calling. I thought about standing above him and drenching him with a steamy golden shower but I really just wanted to get to the good stuff. So, I told him he wouldn’t be able to fuck ever again, then showed him my sharp scalpel. He let out a blood-curdling scream as I put the blade to his nutsack. Like cutting through butter, they detached from his body with ease. He passed out for a few seconds, that is until the blade slowly started cutting at the base of his dick. That’s when the begging for mercy started. But it was far too late for that. He deserved to pay the ultimate price plus, I was enjoying this quite a bit.

Once his dick was just a globby piece of meat in my hand, I whistled for my dog. He came running in and I tossed the dick in the air. Fido jumped up and caught it, devouring it in seconds. Jon just watched and sobbed as his manhood disappeared before his eyes.

Do you deserve the ultimate punishment too? Call me for taboo phone sex!