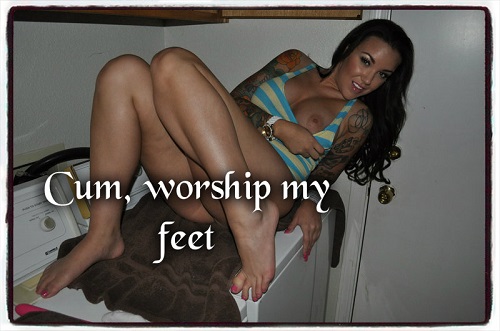 I’ve been going out with this guy on a very sporadic basis for the last few months. Usually we just see each other when one of us wants to get laid. All I ever got from him was vanilla sex; he was too shy or nervous to do any of my ideas. I don’t think any of his previous girlfriends were as open minded as I am. Anyways, I was getting bored of him so I decided to give him one last chance.

We were at his place, naked and making out in his bed. I told him to tell me one dirty little fantasy he had so I could make it a reality. He blushed and said he didn’t have any. Liar. I pushed him onto his back and reached down. I slowly stroked him and told him that everyone has fantasies. I wanted to know what his were otherwise I’d leave. He mumbled a bit then blurted out that he liked feet. I couldn’t believe this embarrassed him; lots of men like feet. I asked what he liked to do with them and he said that he’d always wanted to have a footjob. When he was a teenager he gave his girlfriend a foot massage and he loved how soft but firm her feet felt. Since then he had always wondered what it would feel like to have a pair of feet wrapped around his dick, toes pressing into him as they worked him. I looked down at my recently pedicured toes and told him to sit up against the headboard.

I have a feeling, he’s into more than just “feet”