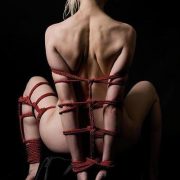 I’m not usually the submissive in a relationship but for the right dom, I’ll do just about anything. When I met Grayson he captivated me right from the start. He had immediate dominance over me and oozed of confidence and sexuality that was so alluring. So, when he asked if he could tie me up, I eagerly said, “Yes, please.” Grayson invited me to his posh penthouse with its very own sex room. Toys and props filled the room, all for the purpose of pleasure, pain, and fucking. He showed me a beautiful red rope and explained what we were about to do: Japanese rope bondage, or Shibari as it is commonly called.

After instigating a crazy holiday fuck party last week, I was really looking forward to not being in control for once. I wanted so much to submit to Grayson and bow down to his dominance and that’s exactly what I got.

As I hung there, I fell into subspace, a sort of natural high that is common in subs being completely controlled. I submitted to the restriction and the discomfort. I felt at complete peace while being out of control. It also felt so incredibly intimate to be at Grayson’s mercy. I loved the anticipation of when his art was complete and his sexual needs would take over. Soon enough they did.

The Pleasure and Pain of Japanese Rope Bondage

Finally, Grayson stripped down but he never took his eyes off of me. This was the first time I saw him naked and he did not disappoint. His chiseled body and stiff cock made my breathing quicken and clit tingle. Instead of letting his desires take over, he remained calm like he really wanted to take his time with me. I, on the other hand, couldn’t wait for his hands to be all over and inside me.

He approached me and caressed his strong masculine hands over the ropes that bound me. Then, at last, his fingers were on my pussy. He teased my clit and I convulsed with pleasure, the ropes restricting my movements heightened the sensations. Then his mouth was on my pussy, his tongue explored every inch and I quickly cried out in an intense orgasm. But, he didn’t stop, he continued for, I don’t know how long, and I orgasmed every couple of minutes. I had so many, that it was almost a form of pleasure-torture and I realized that is exactly what he wanted. I had no idea how much I would enjoy it too.

Eventually, he brought me down from the suspension but left me tied. I got more pleasure-torture as he fucked me in every possible way for hours on end.

I can’t wait to see what my dom has in store for me next.

Do you want to try Japanese rope bondage with me? Call me on my Phone Sex Hotline!