Embarrassing Sex Stories And Getting A Black Baby Dick????* 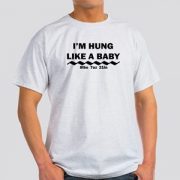 Embarrassing Sex Stories happen every now and then.

I never expected Embarrassing Sex Stories to happen when I met Jerome at the club.

Okay, I’ve just had the shittiest date ever. Seriously. It was so bad. Really I thought I was going home with a winner but he turned out to be a baby dicked loser that I hope I never see again.

I was having so much fun at the club and when this hot black guy started dancing with me getting me so excited. Knowing from experience that the myth about black guys being hung like a horse is totally true my tight white pussy gushes whenever I see a black guy especially if they look like football players. Muscles are so sexy and there’s nothing like a big strong man to pound me into next week. There was no way Embarrassing Sex Stories could happen with this hot black guy.

Jerome was the perfect black guy; tall and muscular with inky black skin that I just wanted to run my hands over.

It didn’t take long for me to tell him I wanted to go somewhere more private and he took me back to his place. I kept things going on the drive there and couldn’t keep my hands off either of us. Rubbing his thigh and fondling my tits, I turned us on until I was getting to fuck him right there in the car. I couldn’t wait much longer for black sex.

I shoved his pants down with his boxers and got the worst surprise of my life. Instead of eight inches of rock hard black dick, I got about four inches of black baby dick.

I just stared at it because I’ve never seen a black guy so small and wanted it to grow. Then I started jerking him off but it didn’t help. I let him go and he knew I’d lost interest.

Telling him I’d changed my mind he kept calling me baby and trying to get me to stay. I told him I didn’t want a baby dick like him. Fuck, even white guys are bigger than that. He told me he was good with his hands and I said yeah because he spent a lot of nights alone jerking off since no woman would go near that stub.

He got upset but I was pissed off at having my night ruined and really gave it to him. I told him he was the biggest loser I’d ever seen and was going to tell all my girlfriends about how he was the only black guy on earth that had a white guy’s dick. He hid it at school in the locker room because he knew he’d never be a real man.

I crouched down and held his dick in my hand, squeezing it hard when he tried to move away. Putting my thumb beside it I showed him how close they were in size.

I then slapped his dick away from me and told him only one of us were getting laid tonight and it wasn’t him.

Opening up a hookup app on my phone I started scrolling until I found a pic of big white dick and showed it to him. “This is what’s getting my pussy tonight,” I said and he had enough.

He looked like a moron as he pulled his pants back up but I managed to get a pic of what he was packing before he could cover himself up. Jerome pushed me towards the door and called me a cock tease like it’s my fault he’s got nothing. This was Embarrassing Sex Stories.