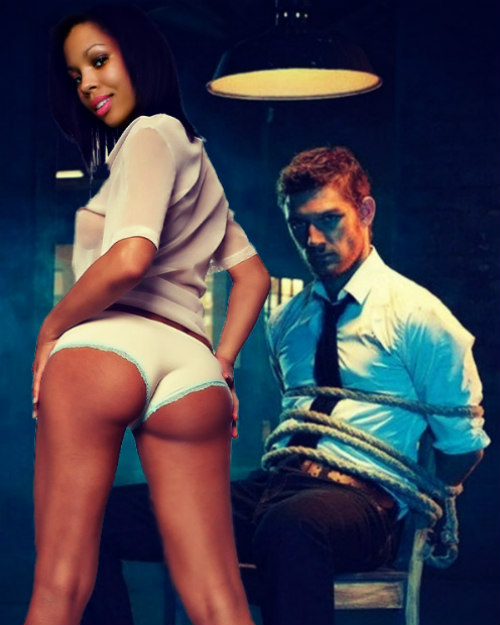 Easy answer, my little cuck: with one of my physically superior, well-hung Black Boyfriends!  Duh!

Now that he’s seen me with my BBC Stud Sam, he’s got to learn some boundaries.  If he’s going to be watching me taking Superior Big, Black Dick in our marriage bed, I can’t have the neighbors wondering what my husband is doing lurking around in the backyard in the middle of the night.  He’s going to need to be house-trained!  He’s beginning to understand his place in this marriage.  However, there are still some grey areas so I’ll be staying home with hubby tonight for some one-on-one “instructions”.  I can tell my dorky, white cuckold husband was excited when I told him I was staying home tonight.  He was thinking we’re going to be having what he calls “sex” (he licks my Superior Black Pussy and, after I’m thoroughly satisfied.  However, he’s allowed to sniff my feet and jerk off at the end of the bed LOL!).

Sam thought it would be a good time to finally show hubby who’s in charge of this marriage and what his “sex life” is going to be like going forward so I agreed to have Sam stop by for some additional instructions…  I can’t wait to hear what Sam with his 10 inch BBC has to say about it once he actually sees for himself how small and pathetic my husband’s puny, pink pecker really is!  We’ll both have a good laugh at the white-boy inferiority my husband is a perfect example of! LOL!

After my husband and I ate dinner that evening he was rushing to clear the table and do the dishes (like a good, little white bitch-boy).  You could tell he was dying to hear what I had planned for the “two of us”; his stupid, perverted, white ass still had no clue what was in store for him… LOL!  You white boys crack me up!

I started by having my husband strip down to his scrawny, naked white ass while I filmed it all on my phone telling him he looked sooo sexy stripping that I wanted to capture the moment for my later “viewing pleasure” (he actually believed me! LOL!).  He nervously and sheepishly obeyed my first command. Now standing nude in front of me still fully clothed, my ebony cheating wife phone recording the entire thing, his tiny, little white-boy cock was STILL hard!  All of its full 4 small inches!  “Turn around!”, I said more forcefully now.  You could see the realization beginning to show on his face, he wasn’t getting any part of my body tonight.  No “sex” either.  Instead, it would be his pale, weak, and pathetic body being used for my amusement!  He saw the chair I had placed behind him, as well as the chastity device I had bought for him earlier that same day.  “Try it on, dear husband! I’m pretty sure I got the right size! LOL!”  He glanced back at me over his shoulder and the look of complete humiliation was priceless!

He is so funny

I started to laugh so hard I almost dropped my ebony cheating wife’s phone!  His face was beet red and his little, white chicken legs started to shake which only made me laugh even harder!  I pointed at his scrawny, little legs and said, “Look at those funny, little legs, boy!  Now you gonna put that cage on your little, white dicklet or what?!  I haven’t got all day, you weak, white-boy cuck!”.  He collapsed in defeat in front of the chair.  Almost bowing before me and the little, pink cock cage I had bought for him (using his money, of course).  He looked up at me, tears welling up in his eyes, and asked, “If I put it on, when can I take it off?”
Want to hear more of this ebony cheating wife story? Need an ebony mistress to fulfill your cuckold stories? Call Camille at 888-340-8794