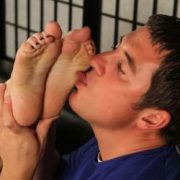 For months he had disappeared with no call or no email. You could imagine how pissed I was when I finally had heard from him. Are you ready to hear how this divine dominatrix dominates and humiliates male slave? I’ll start by letting you know I had animosity built up but I released it all out on him. After establishing the where the fuck he’s been which wasn’t a good excuse I immediately told him he’s in trouble. Before he had disappeared I was going to reward him with an orgasm but now I was revoking his orgasm privilege. An orgasm is a privilege not a right and it is my right to take away if I’m your mistress. The slave starts apologizing but it’s too late. He drops to his knees kneeling on the ground pleading for mercy but there will be no mercy.

You have heard that old saying spare the rod spoil the child. I believe in discipline. What happens when I show mercy? He turns into a little spoiled slave that thinks he will always get his way. As he is kneeling he’s kissing my feet. My slave knows all the pleading and foot worship in the world won’t save him from my wrath. I kick him because I never granted him permission to touch me. He rolls onto his back in pain then I shove my stilettos into his mouth. I say “This what you want bitch” while fucking his face with shoes. Obviously, he couldn’t answer me but it was fun watching him try. I put his collar on him and had him strip bare. He got back down on all fours with his hands flat on the floor. It was time for his punishment which was 50 spankings.

Bend over and count

He knows the drill each time I spank him he counts out load but if he messes up we start over. Luckily my slave got through the whole 50 spanks without messing up. The doorbell rings and I make my slave answer. I had forgotten all about my girlfriends coming over but I take advantage and put my slave to work. First, he had to pour us drinks, then he had to light our cigarettes. At one point we used him as a footstool but then I saw my friend’s shoes were so dirty. My friends shouldn’t walk around with dirty shoes so he had to clean them. We laughed the whole time he was licking our shoes, made degrading comments and blew smoke in his face. I’m sure it was humiliating to sit there naked in front of a bunch of women while he just took our demands.

My friends couldn’t believe I had a pet that is so pathetic but they haven’t seen all my tricks yet. Grabbing his face, I demand him to jerk off in front of us. My pathetic slave does what is commanded and jerks off. The moment I see he is close I make him stop stroking. We made a game of it laughing and telling him to stroke then telling him to stop. It was torture for him but we were having fun. Watch how this divine dominatrix dominates next. I put the leash on him and we went for a walk. Yes, we went for a walk outside with him naked. I brought along some dog toys and we played catch with him. It’s more degrading when you’re only allowed to touch the toys with your mouth. My little slave got so dirty I had to bring him inside.

Just when he thought it was over

When I take him back inside I put him in the tub for a bath. But this isn’t just any bath and my friends are going to help. We lay him down and we all piss all over him. It’s a golden shower. It should be a privilege to be soaking in my golden shower. All of us stand over him and soaking him head to toe in our piss. After his shower, it was time for bed but I wasn’t letting him leave. Last time I let him leave he disappeared. I locked his cock in chastity and put him in his cage. Before turning off the light I left him some food and water in his doggy bowl just in case. Now you see how this divine dominatrix dominates.