A Dirty Picnic Leads To Public Sex In The Park* 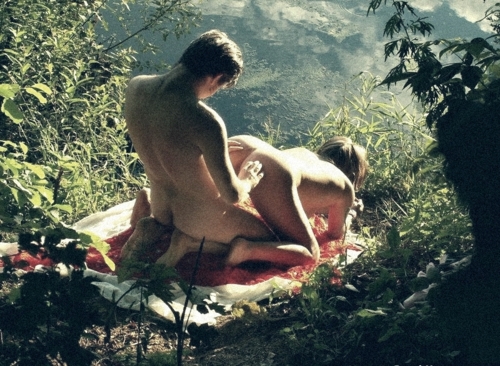 Public Sex can be risky but that’s what makes it so damn exciting!

Public Sex and the risk of being seen by others is probably not what my date had planned but it’s what he got!  Vic is a sweet guy who’s into the whole acting like a gentleman thing which makes a nice change from all the guys who just want a hot dirty fuck. The other day he surprised me coming over and saying that he was going to take me on a picnic. We ended up going to this quiet little park and he had everything planned; he’d brought a big soft blanket for us to sit on and he remembered my favorite foods. It made me feel so good to be treated like that, it kind of turned me on.

We were sitting beside each other after we had finished eating and were just relaxing. It was really quiet and there were just a few people around, it felt like our very own private park. I grabbed his arm and pulled him down with me as I laid back, snuggling against him. “This is so nice.” I told him and ran my fingers over his chest before going lower so I could unzip his jeans. He put his hand on mine to stop me. Asked what I was doing but I told him to relax, we were alone.

I got up and quickly lifted up my skirt so I could take my panties off and I could hear him whispering at me to stop before somebody caught us. I kept my skirt up and touched my ass while asking him if he really did want me to stop and he hesitated so I took that as a ‘No’. Then I crawled down the blanket and straddled him, keeping my back to him as I knelt over him.

I reached down and found his dick, giving it a few strokes while I played with my pussy. I moaned as I got wet and held him still as I lowered myself down on him. His tip pushed into me then it rubbed past my walls as he went in deeper. It felt so good to be stretched and filled and I moaned as I sat on top off him. I put my hands on his thighs and began to ride him. Moving up and down as he touched my ass. I pushed down on him and moved faster, rolling my hips forward as he groaned behind me.

I sat up as it shot in me and I thought of how wet and nasty my pussy was now which made me want to go again.