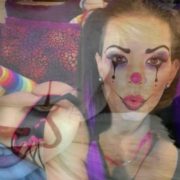 Oh, the luck I have! And, ALL of it’s BAD! So, I had finally gained my freedom from my last horror episode and just feeling back to normal when along came the dirty Clown torture fuck. What was coming was not at all good, but a lot like my life always is. Walking through the nearly abandoned town near me; it’s abandoned because of the sexually depraved backwoods forced fuck I once endured there. What a debacle that was.

Seeing someone off in the distance I was all ready to smile and be neighborly, but the closer I got, the more incredulous I became. It looked like a clown. And not just that, he looked like the one from that decades-old horror film. While trying to shake off my fear, I looked him straight in those big red eyes and said, “Hello! Nice day, huh?” He clearly had something on his mind. AND his cock. It was protruding through his dirt-encrusted jeans and it was already dripping pre-cum. I took off running down a dank alley between the abandoned storefronts as he gave chase while emitting a hideous clown laugh. At the end of the run, he squeezed himself out of a drainpipe. I barely escaped and ran into the old factory where he cut, bound and gagged me!

He wanted a dirty Clown torture fuck and I nearly fainted.

If you’ve been following along, you’ll already know of the fetish phone sex I’ve been eXXXposed to in the last few years. So, hearing this will take you down a different and equally deviant path! LOL. This clown looked fucked up and at first, I thought he was just an old drunken homeless man camping out in one of the abandoned shacks. Again, I was wrong. He moved with the speed of a comic book character and that scared me even more.

His long clown arm encircled me; pulling me closer to him and I could hardly breathe. He smelled of garbage, old food, and death. My mind whirled with all of the fucking I’ve done, most of it I enjoyed. But, some had been forced on me. Okay, so truth be told, I even enjoyed a lot of the forced sex. But, a dirty clown torture fuck was not something I had even fantasized about. Some things are worth the wait! Aren’t they? He danced with me while humming some strange tune heard only in his head… The BIG one on his shoulders.

We’ve all seen the IT movies and Mr. Pennywise.

Ugh. He was less sexy than the backwoods, inbred screwing I’d been subjected to; not much, but yeah, those people won over this creepy carnival guy. I knew better than to fight. He was clearly well over six feet to my five-foot eight-inch frame. And, he was lifting me slowly from the ground until I was in his complete control; creepy helium balloons floating aimlessly around us. But, I felt his dick like a swimming pool diving board riding down my belly while he lifted me, and danced on. This would definitely be a dirty clown torture fuck; or would it be?

I know he felt me relax in his grip; my body went almost limp like I’d passed out. Well, of course, I hadn’t, but I heard him moan in pleasure and that made my pussy moisten. Oh, it’s gonna be on and popping in a minute. All fear left me and I moaned around his hand on my throat. Did he sense my, umm – willingness?

This dirty clown torture fuck might be all HIM being tortured.

He’d never been up against a chick like me who had seen and done it ALL! Haha. Okay, so maybe I haven’t done it ALL, but there’s no more willing a participant in the art of deviance than I! That much I can guaran-fucking-tee you! I turned in his supernaturally strong arms and let loose the most wicked laugh I could croak out. His grip loosened in what I can only imagine was an extreme surprise. Haha. Yeah, I’m great at that ‘surprising men’ thing. He did not, however, lose his erection. Good. I was gonna be needing that! Giggle.

Out of nowhere, he dropped me like a sack of potatoes onto his makeshift bed and I landed hard! Then, he cut off my clothes and assessed his prize pussy. Smacking my face with a huge uncircumcised cock must have made his day because there he was sticking out of his clown pants and right up to my face! So, I did what a cum-whore does best; I sucked that fucker until he was bobbing and weaving like a drunk at last call on a Saturday night!

If he wanted a dirty clown torture fuck, that’s exactly what he’d get!

I allowed IT to cut off my clothes and force his cock into my mouth. I just LOVE pretending to not want to suck; it makes it so much more fun, don’t you think? Then, came the forced fuck of a lifetime. Though, I think he knew I wasn’t really screaming out in fear. That didn’t slow him one bit! I moaned for him to “please, let me go. I swear, I won’t tell!” He laughed that wicked laugh over and over again until I squirt all over his clown suit!

He lay beside me taking his time and smearing our mingled cum all over my tits as he licked my face. I normally don’t care for all that spit on my face (especially since his breath was horrendous!), but something about the sad clown way he did it made me want MORE fucking! The room he did me in was almost as filthy as he and I could hear dripping water from somewhere off in the distance. And, it must have lulled me to sleep because when I woke, he was gone! Now, came the question in my head, ‘should I run, or stay for more another dirty clown torture fuck? Guess which choice I made? haha.