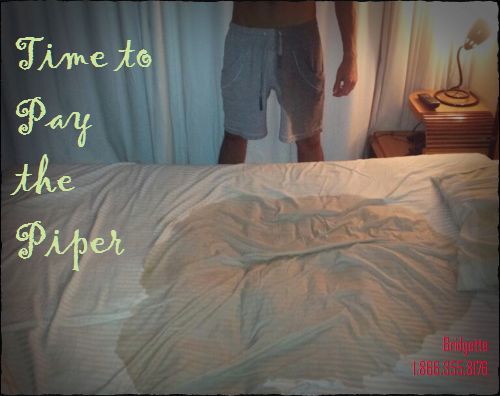 As your girlfriend, I know certain little things that you wouldn’t like to be out there for public consumption. Case in point: I know that after a certain number of drinks, your old childhood bedwetting problem returns.  And just like your mother had to do when that occurred, I’ve warned you that if your little “problem” returns, I might have to subject you to a bit of forced diapering. And uncovering a buried diaper fetish.

So, when we’re out with our friends, I subtly try and remind you of that little factoid.  Does that deter you from your destructive behavior? Nooo… you just brush me off and keep drinking with your friends – beer after beer; shot after shot.

In hindsight, you can see that this behavior was the catalyst for your forced diaper fetish

The next morning, just as I predicted, you wake up wet, the bed drenched; clear evidence that you’ve never truly shucked off your childhood affliction.  At the realization of what happened, you squeeze your eyes shut, dreading the tongue lashing that is sure to come – but you hear nothing… just quiet.  You open your eyes and look around – I’m nowhere to be found.

Thinking you’ve dodged a bullet, you then stumble out into the living room, your head pounding from the mother of all hangovers.  You look up and stop dead in your tracks – there, sitting in front of you, is not just me, but my best friend as well.  And to compound the situation (as if that were even possible with you standing there with wet boxers on) and your humiliation, you see that I am holding a diaper, softly fanning myself with it.

I say matter-of-factly, “Now we do it MY way. Lay down.” You know that tone – it assures you that this is not up for debate. And then I add, “You should be grateful I’m not going to put a sissy diaper on you… THIS time.”

So tell me, how would you handle being humiliated, treated like a little boy, forced diapering thrust upon you, in front of another hot, sexy female? Would your new diaper fetish be apparent in our humiliation phone sex session? Call my phone sex line Let’s find out, shall we?