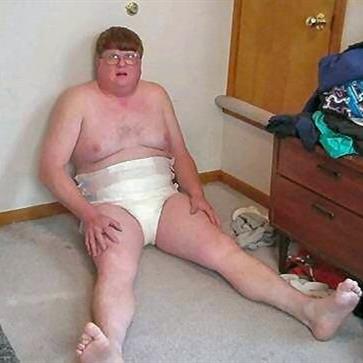 A diaper fetish baby is just so much fun to play with. My little whore of a boy toy just loves wearing Pampers. I think he indulges in the crinkling sound that nobody around him can really hear. He loves the exhibitionist part of it! But he also loves living it up and being a little brat. When he’s been acting fussy and starting little hissy fits with me, though, I like to take control. My little baby has to behave like a good boy, or I let my mean streak out. Last time he acted up, his little bottom was bare and red for a week! However, I think he likes that.

Sometimes I have to make the punishments extra mean.

Last time I brought out a little whip and spanked him so good, he had little welts all over his ass. But this time.. the way I’m going to punish him tonight is going to test this little toy’s limits. I have a little butt-plug that he likes to wear. When he acts up, he’ll be wearing it for a little bit. However, if my diaper fetish slut acts up even more, I might make him stuff an entire dildo in there, under the diaper. He’ll be walking around with a huge toy stretching him out – and I might even spank him with it inside. It’ll make the punishment more fun, don’t you think?