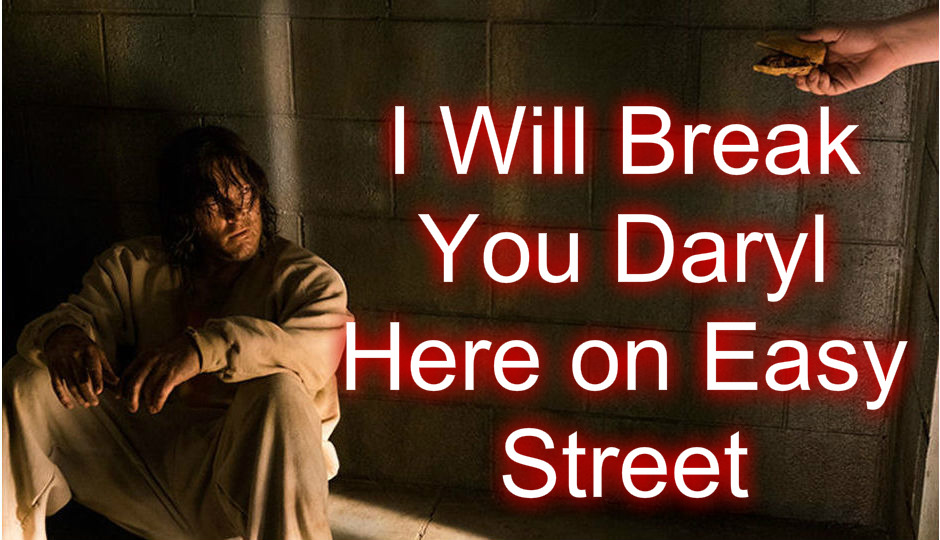 Detainment of a Bad Ass – A Daryl Dixon Fantasy

Detainment of Daryl? What? Okay, so, spoiler alert. Don’t read if you haven’t seen the season 7 episodes that are out right now.

Negan and I were super tight. He occasionally let me go with D to talk to his newest captive. We opened the cell door. D started taunting him about how Negan killed some guy named Glenn. How it was all the captive’s fault. He looked at D stone faced. Nothing seemed to faze him.

“If Negan wants this guy to break you know I can break him.” I told D with a twinkle in my eye and an edge to my voice.

D shrugged. “I’m loosing my patience with you anyway, Daryl. Let London have you.” With that he left.

I grabbed Daryl by the front of his sweatshirt, put my dagger against his throat, and led him to one of the deserted rooms. It had a comfy bed in it. I closed and locked the door after making two of Negan’s grunts wait outside; just in case.

I pushed him onto the bed and he just sank like a stone, but I didn’t see defeat in his eyes; not yet. I lowered myself so I could be eye to eye with Daryl.

“I’m going to break you. I’m not going to torture you. Not yet. I have other means.”

I raised my dagger, pointing it at his neck, then slid the blade down, ripping his sweatshirt right down the middle. “Now we’re getting somewhere.” I slid my tongue across my upper lip and smiled deviously. Still he sat there, his forearms on his thighs, just staring into space.

I leaned close to him and whispered right in his ear. “You have no idea what I’m capable of. If you think Negan wants to make you his bitch, you haven’t seen me when I have my teeth into something. You’ll kneel, don’t you worry about that. But you’ll be kneeling for me.”

I grabbed him by his hair and pulled him to his knees. His mouth was just level to my pussy…..