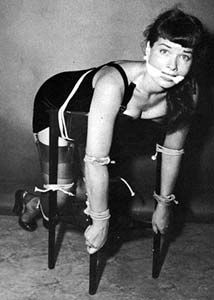 Film and Meditative Bondage aren’t “complicated” as Decorative and Torture/Punishment Bondage were, so I will be able to cover both topics in a single post!

Film bondage is exceedingly similar to decorative bondage in that it is visual and “non-violent”.  The key difference is that there the added benefit of quick release from the bonds.  It sounds like this would be ideal if you get unexpected company!!

Meditative Bondage, also known as Shibari (which I mentioned back in Decorative Bondage). most likely evolved back in Japan as a religious tradition.  When paired with an eye mask and ear plugs, the “subject” is able to meditate and reflect on their situation.

Now that I have covered all of the forms of Bondage, let’s talk about the whole “point” of restraints 🙂

Bondage leaves the submissive (or bottom) vulnerable to the whims and ministrations of the dominant (or top).  They do this of their own free will, trusting their partner and knowing that they have the safe word.  The theory is that some submissives find a freedom in being helpless and bound.  There are other submissives that fight and pull at their restraints, enjoying the pain that doing so inflicts.