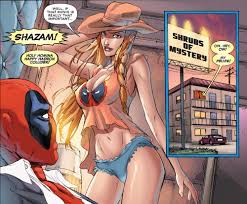 I opened the door and the UPS man was standing there next to a large package. I asked him to bring it in. I never expected what happened next.

He shut the door and locked it. He stood there looking at my short shorts and a tank top that was showing way too much cleavage.

My pussy was spread wide!

I signed for him and turned expecting him to leave. He didn’t but instead, he shoved me onto the couch. He yanked my shorts down. You dress like this for one reason only, he panted. He was struggling to hold me down while pulling his dick out. Suddenly he gasped and blood poured from his mouth. I lay there my shirt ripped open baring my tits and my legs open spreading my pussy for all to see but I just sat still in shock. The man’s body crumbled and fell on top of me and no sooner than it landed someone was rolling him off me.

He liked what he saw with my body exposed to him!

There stood over me was Deadpool. Oh my God! He was openly admiring me but turned his back unexpectedly. You should cover up before I lose control of my urges as well. I pulled my clothes together careful not to look at the dead man on my living room floor.

Suddenly all the adrenaline hit me and I was so turned on. I walked over in front of him and letting my clothes fall open again I lifted his hand to my breast. I want to thank you for saving my life. He needed no further invitation. He lifted me up and fucked me right there on the wall beside the dead guy. He never removed his mask. Just spread my legs and shoved his dick inside me hard and kept thrusting harder!

A few minutes later I was standing at my kitchen sink waiting for the cops when I happen to look next door and saw Deadpool sneaking in the back door of my neighbors. I was very curious about what he was doing. I started to open the door and ask him when he pulled his mask off and it was Kevin, my neighbor. He was NOT Deadpool! He was impersonating him, but why? Oh, he had some explaining to do.

Want to find out more about it? Just give me a call at phone sex kingdom. I am happy to tell you all my dirty little secrets during some hot phone sex. Fantasy is my specialty! I am also open to anything so taboo phone sex is great!