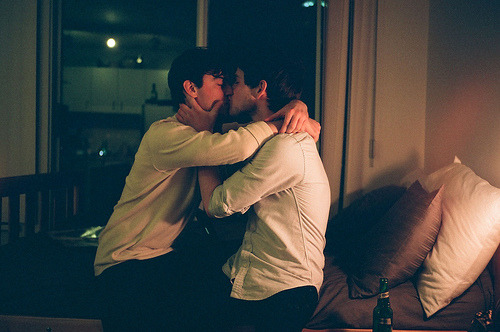 I thought it’d be fun if I could show them how great dick can be. So I set up a little something. It was going to be an awesome first-time sex story!
We met at Aidan’s and I could tell they were nervous while we got undressed. They looked everywhere except each other and I was the one who had to get things going. I took their hands and pulled them down on the bed with me then put Aidan’s hand on Grant’s chest, making him stroke it. “See? It’s not so bad.” I said and moved his hand lower while he blushed and tried not to look at Grant’s dick.
It was soft so I ran his fingers over it to get him used to it. I let him go and wrapped my hand around it so I could jerk him off. “Why don’t you two kiss for me?” I said and pumped his dick while the two boys shyly kissed.
I felt Grant start to get hard and went faster. Cupping his balls I kneaded my fingers into them as I rubbed my finger on the underside of his head.

When he was rock hard I made the two boys stop kissing and had Grant get on his knees.

Watch because this is how you suck cock.” I told Aidan and leaned forward, holding Grant’s dick as I put my mouth around it. Sliding down, I relaxed my throat and swallowed all of him. I slid back up then down, sucking him off nice and slow.
I could see Aidan watching and got excited as I thought of his pretty mouth full of dick. Stopping for a second I told him to suck on Grant’s balls while I worked his dick. He laid down and lifted his head, trying to get a ball in his mouth. “Don’t cum without permission,” I told Grant then went back on his dick.
He moaned and pushed up as we played with him and he put his hands on our head, holding us down. Listening to him after a few minutes he panted as he said he couldn’t hold on much longer.

I slid him out of my mouth and had Aidan lie on back in between Grant’s knees, telling him to keep his mouth wide open.

I then held his spit covered dick in my fist and jerked him off hard and fast. It only took a couple of strokes before he swelled and cum started shooting out of him. It fell on Aidan’s face and in his mouth in messy strings and he lifted his head, trying to eat more of it.
I pumped his dick until he had emptied himself on Aidan then I slid my hand off his dick, swiping up the last little bit that was covering his head. Rubbing it over Aidan’s lips then the three of us laid beside each other. I think they’re going to love dick now that I’ve shown them that it’s okay.