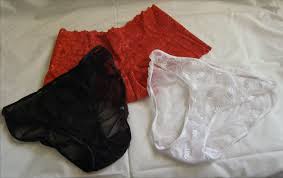 I found out Jared has A Panty Fetish By accident.

When I found out about his Panty Fetish I decided to have some fun with him.

I’ve been dating Jared for two weeks now and it’s been going pretty good. He knows all the kinky stuff I get up to with other guys and he’s fine with it. He’s just glad he gets to be with me because he knows his place.

Driving to his place I banged on his door until he opened it. He was topless and said he was just getting changed then he was going to see me. I thought he had another girl in there so I pushed past him and checked out his apartment but he was alone.

Maybe he was telling the truth and changing. It didn’t matter, I was there now and ready to fuck. He was standing in the hallway and I pushed him into the bedroom as he said he’d be ready in a minute. I wasn’t giving that and I started undoing his jeans but he stopped me. No one’s ever done that before. Who doesn’t want me going for their dick?

I smacked his hand away and told me I waited long enough, why was he being so weird? Popping the button open I tugged down the zipper then saw what the problem was.

He had on a pair of red panties and they looked familiar. I pulled his pants down to his knees and got a good look at them. They were tight and showed off his bulge which was pretty big but I was more interested in the fact that they were my panties.

“Where did you get those from?” I asked him, sounding angry and he got embarrassed as he told me that he’d taken them when he’d been at my place. What a perv! Stealing my panties and wearing them without telling me!

God, I wanted to get fucked but all I could think about was punishing him. I told him to take his pants off and get down on his knees.

He did and he looked so sad kneeling there in a tiny pair of panties that barely covered him. “Tell me how sorry you are and beg me to forgive you,” I said and he blushed as he stared at the ground and begged.

After awhile I pushed him away from me and he fell on his back. I put my foot over his dick and pressed down on it as I told him how disgusting he was. Grinding down I gave him a little kick in the balls that made him curl up. I got out my phone and took pictures of him so my girlfriends could see what a Panty Fetish loser he was.

If he ever steals my panties again I’m going to make sure everyone sees the pictures. I really hope it happens because I’d love his friends, family, and co-workers to see this Panty Fetish loving bitch kneeling at my feet.