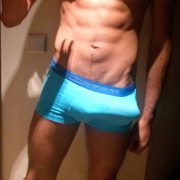 I thought he was just someone fun to toy with.

You should have seen his face when I told him what I do for a living! It was pretty fun when he started asking all kinds of questions, and soon he realized he’d been completely wrong about me. Yeah, he knew the dirty little tease side of me, he knew I’m a little crazy and love to try freaky things in bed.. but he didn’t know how far I was willing to go. Sometimes he did have a slight idea. After all, he found a lot of black cock porn on my phone’s hidden browser app and I didn’t deny it at all. He didn’t think he’d be able to open up about his real fantasies with anyone. He was stuck confessing his kinks to whoever he met on dating apps or online fetish websites, maybe even Craigslist from time to time.

It was all set to go.