Will My Craving For Taboo Sex Cost Me Salvation?* 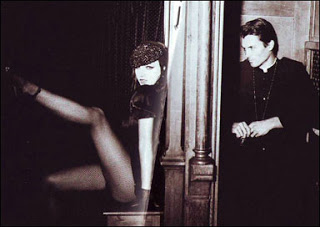 In my dirty little mind, there is nothing more provocative than Taboo Sex.

And nothing captures taboo sex quite so well, for me, as the Church.  It’s something I can’t stop thinking about! The very idea of finding a Priest or Nun attractive carries an unspoken stigma, which makes it nearly irresistible!

But it’s also the vows they take; Forsaking the pleasures of the flesh – often when they, themselves are in their prime!  So, the idea of going to Confession and telling the truth about my fantasies with Father Burke seemed forbidden and lewd, on principle.  But what if I did?  What if I confessed all and it was him that fell from grace?!

I imagine him listening to me describe the act, while he becomes erect at the thought of such delicious taboo sex within the very walls of the place he took his Oath!  The idea of him fighting against his nature, as I tell him how many times I’ve screamed his name while touching myself, made the tiny kernel of flesh deep between my legs throb and swell.  He would ask me to stop telling him such things, of course – but not in a way that showed any conviction.

I would hear him begin to move his robes, adjusting himself as he tried to ignore the growing bulge of his loins.

There would be a palpable tension as I continued to unburden myself of all my desires for him, which would push the limits of our restraint. However, such want would not be contained long; In the end, he would push his beautiful, thick member through the opening of the divider and I would receive the Communion he offered.  Not fully deemed ‘taboo sex’, but I would have to return to him again….after all, am I not a sinner?