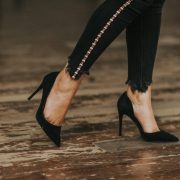 Coworker foot fetish problems are not something I’d ever thought I’d have! When I was fresh out of college, I’d never thought much about people with foot fetishes. Sure, there are always those silly videos that make fun of it. There were a LOT of shoes on Nickelodeon when I was growing up that seemed to fetishize a lot of foot kissing. In fact, I think it was the source of some scandal that claims a director purposely fetishized some foot worship scenes while passing them off as comedy. Hell, maybe that’s why so many people seem to love feet nowadays! Or maybe the world’s just becoming more kink-friendly.

Anyway, I was a pretty innocent girl when I was growing up – and I use that term very loosely. It only applies to foot fetishes, really. I had several black fuckbuddies and played around with several kinks when I was growing up, all the way through college. However, I’d never played with a foot fetish much until I was exposed to it with my first job. I scored a cozy little job at an office downtown. The dress code for this office was pretty business-casual, but I loved wearing heels with everything I wore. I’d pick out beautiful black heels with a modest height. My favorite ones were a pair of peep-toe kitten heels that I received for my birthday.

It was a job, but also a small fashion show for me.

Let’s face it… I would have been a million times happier wearing pajamas to work every day, but that was clearly not the case. So, I made the best of the situation! I wore some sexy little heels every day to spice it up and make the outfits more entertaining. Honestly, I thought I was doing all for myself until I realized I had a little ‘secret admirer’ at work. I thought it was just the result of all my flirty daily outfits. Curiosity washed over me. I wanted to know had a crush on me! However, I could never figure it out. All I received was a little bouquet of flowers and a note, reading: “You look beautiful every day, with the heels to match.” OF course, that inflated my ego like no one’s business.

I had no clue that all of this was due to a coworker’s foot fetish. But I grew so curious; I started playing detective. On my breaks, I would keep an eye out for those who would go on break with me. It didn’t take long to find out that it wasn’t just a crush: the little creep was stalking me! Guess how I found out? I took my regularly scheduled mid-morning break and wandered off to the bathroom. After fixing my makeup a little, I shut the door to the bathroom stall and sat down for a bit of me-time. While playing with my phone in silence, I heard the entrance to the bathrooms shut, and the stranger occupied the stall directly next to me.

Then, I noticed the shadow.

It wasn’t the regular shadow of someone using the bathroom. No, this shadow crouched beside me. Then I saw it. Usually, I would be too distracted playing with my phone to notice the hunched-over figure of someone close to the floor. This time, he slipped up and set his hand on the floor. The little creep snuck into the women’s bathroom and came directly next to me, just so he could look at my heels!  I was flattered first, and just a little bit creeped out. Here was my secret admirer: sneaking into the women’s bathroom and staring at my heels from the neighboring stall.

“What are you doing?” I asked. I could hear him let out a shaky breath. He was panicking, unsure of whether to run away, fake a feminine voice, or own up to his mistakes. So, I cut him some slack. “I know you’re the guy sending me flowers. But sneaking into the bathroom – a little creepy, no?” He chuckled. A minute of silence passed before he confessed to it, telling me that he’d always loved heels, and fell in love with all the shoes I wore to work. It wasn’t his fault in the end, so I accepted his coworker’s foot fetish. He was hopelessly attracted to them. And I simply loved wearing cute shoes.

So, we struck a deal.

I stepped out of the stall and went over to the marbled bathroom counters. Quickly, I hoisted myself up to cross one leg over the other. He stayed hiding in the stall for a moment until I beckoned him to come out, and he obediently walked out. Until that point, I hadn’t put a face to the voice. Much to my pleasure, I found out that it was my boss, of all possible people. I realized that I could get away with whatever I wanted after that, and he knew it. He smiled, blushing like a sheepish kid, and I just giggled, raising a leg gently for him as if offering it out. Slowly, he crept up to take it, lowering himself to kiss my beautiful heels and the lavender pedicure that was peeking out through the peep-toe design.

He was in bliss, and I took complete advantage of it. What started as the curious adventure of one coworker foot fetish adventure turned into a little fetish phone sex like never before. He became my plaything – and my feet became his favorite part of every workday. It spiraled and spiraled, and I’d let him do all kinds of crazy things. Sometimes I’d let him kiss and suck on every toe in between our meetings. Other times, he snuck me into his office so I could sit on his desk and give him a heel footjob. There was no limit to our kinky little adventures.