Cougar vs The Early Twenties – Thoughts About Being a Cougar* 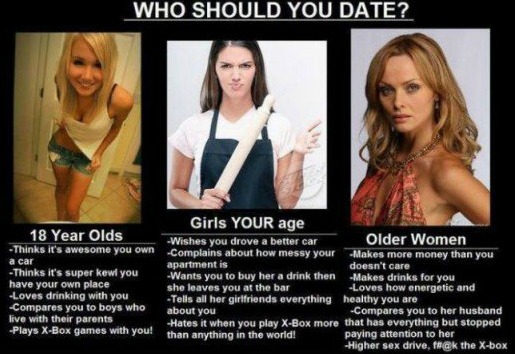 I love being a cougar.

As a woman approaching 40 I understand why women fret about getting older and, while I have no problem admitting to doing everything possible to stay healthy and young looking, I’m not embarrassed about my age.  I love being a cougar.

Since I never really knew what it meant, I couldn’t resist looking it up in the Urban Dictionary.  It says:

“(See also hunt, prowl, corner, pounce)  Noun.  A 35+ year old female who is on the “hunt” for a much younger, energetic, willing-to-do-anything male.  The cougar can frequently be seen in a padded bra, cleavage exposed, propped up against a swanky bar in San Francisco (or other cities) waiting, watching, calculating; gearing up to sink her claws into an innocent young and strapping buck who happens to cross her path. “Man is cougar’s number one prey.””

The definition is definitely humorous but, when I read it, I can’t help but think of some desperate, old, tacky-looking hooker hanging out in a college bar waiting for her prey.

Do these women really exist?

First, I don’t hang out in bars with the sole purpose of finding prey.  Second, if I were to hang out in a bar (with the sole purpose of finding prey) I wouldn’t be dressed like a $5 prostitute.  Last, I don’t care about my prey’s age.  While I want to be with someone who’s energetic and adventurous, I also want someone who’s experienced and actually knows that no two women are alike.  In other words, I don’t need a puppy to train; I just need a dog that’s eager to learn new tricks.

In my early twenties, I had no confidence, didn’t know what I liked, and (if I did) was afraid to speak up.  I believed the bullshit that love wasn’t about sex and sex shouldn’t be the most important part of a relationship.

Now that I’m older and smarter, I’m confident.  I know what I like and what I want, and have no problem verbalizing it.  I’ve learned that, even though sex may not be the most important part of a relationship, it’s definitely the hot glue that holds it together.  I love to have my pussy fucked, my ass fucked, and I love taking a cock down my throat.  So while this cougar may choose men as her number one prey, her number one priority is getting off.  What’s your number one priority?