Confessions of a Pampered Bitch: Money 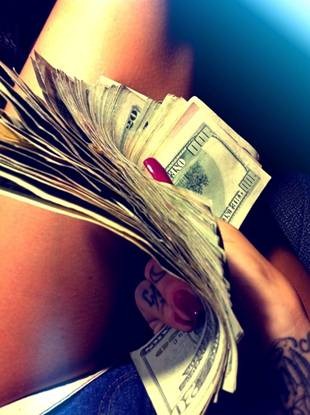 Talking about shoes and my mothers next husband left me thinking back her short marriage to him. Upon getting engaged my mother was bought a house, you see moms next husband was a man whom mommy said loved the ‘facade of control’ he worked hard and made a great deal of money in his field. He was a artist who made beautiful pieces when he was depressed and my mother knew that so she kept him in a constant state of creativity. When I would come home from my fathers house my mother would have attained whatever her goal possession was that week. She loved money and she was never shy about it, when they finally did get married my mother got the best of the best and started living like a playboy bunny. The shopping trips were endless for us and even when we started living with her much older husband mommy was sure to keep the house she was given as a engagement gift.

My mother held off until her took the prenup off the table, I didn’t understand why until one night very very late into the wee hours, he’d run into a dry spell and hadn’t been producing any good pieces and my mother was furious he was putting a cap on her spending. Mommy’s newest husband Tim thought I was sleeping but I wasn’t I was up on the internet browsing around for something to do, when I heard glass shattering and screaming downstairs I quietly left my room to see what was going on. The closer I got the better I could hear my mothers words.

“Your fucking pathetic! You piece of shit!! Not only are you incapable of pleasing me because your dicks useless but!! but!!! you can’t paint anything!? You will not cut my spending budget or I will divorce your pathetic sniveling ass!” My mother screamed throwing another bottle at my step father, I noted it was a empty vodka bottle and watched it sail through the air nailing him in the head and taking him down. He curled into himself and I merely watching, by this point I was aware of just how domineering my mother was. She had told me if she ever discovered her in her fits to pay attention because it was my chance to learn how to get my way. No one dared call her a crazy bitch but sometimes I heard the maids whispering to one another about my mothers behavior.

Watching from my hiding spot I watched my mother storm over to Tim, wild black curls were a mess and losing they’re luster signaling she’d been unable to get her hair down this morning. “We both know how pathetic you are!…..How your dicks so small it looks like a fat fucking clit! The only thing that pleases me is your mouth and your wallet and your fucking up with money now too!” She scream.

“Muffin p-p-please!” He whined curling in on himself at my mothers abuse “N-Nothing will be cut” He promised ceasing my mothers rage.

“Don’t call me Muffin you fucking ingrate! I do so much for you!!! I cook for you! I manage all the finances! I reschedule my appointments for you so I can spend time with you!” My mother shouted at him. “Why don’t you love me!?” In an instant she’d flipped the tables and started to fake sob (Tim could never tell the difference).

“Get up!” My mother told him and carefully Tim rose. sniffling she wiped her fake tears and allowed Tim to embrace her. My mother moved away from him grabbing the front of his pants “Baby your clitty wants attention” She cooed at him grinning and watching his face turn red. “Let me see” She commanded and he obeyed not wanting to set my mother off again. I was 15 but i’d seen quite a few cocks and sucked a few of the older guys off. What I saw looked nothing like a dick, it was extremely tiny if my mother had not stated he was hard I wouldn’t have believed it. My mother got on her knee’s and used her thumb and index finger to make a circle and started moving it up and down on his cock jerking it.

“You know sweetie I just love how it takes no work at all to play with your pretty clitty! I’ve seen infants with bigger then this!” My mother laughed cruelly my step father grunting in pleasure. I watched entranced as my mother handled something so small “You know I think legally this doesn’t even make you a man! I’m married to a women pretending to me a man” My mother told him. He grunted again and tensed but my mother stopped her actions and shifted up. “Your not allowed to cum till you bring in another check! Come on Tim I deserve some pleasure for even touching that thing” My mother told him walking away. I listened to them walk away most likely towards their room.

I had wished i’d taken a picture of it….I promised though that I would the next time I saw it and post it for everyone to see a world wonder, i’d never ever seen a dick-less man before. I didn’t know then that, that would not be the last i’d see of those itty bitty bits dangling between a supposive man. The next day when I woke up for breakfast my mother was sitting on the kitchen counter counting money.

“Luna! Come on sweetheart Mommies taking you to the spa! I have a special treat for you later!” My mother told me excitedly. Inhaling the scent of cash she giggled gleefully, my mother really did love money.