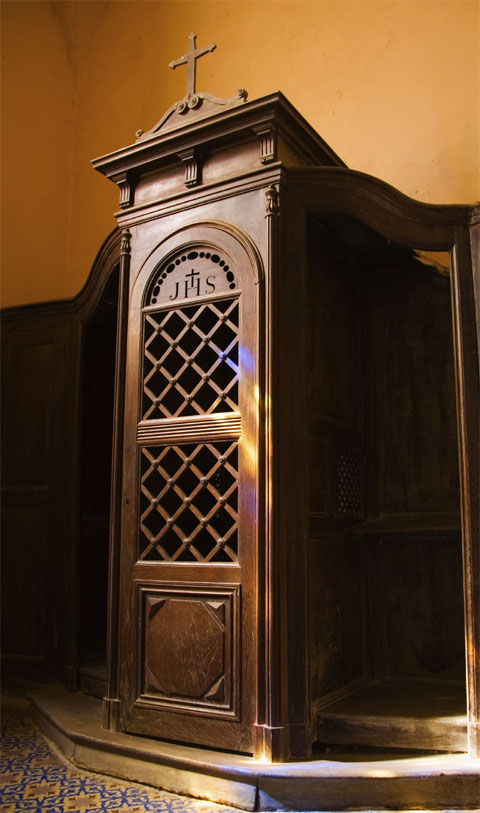 Remembering that I had to kneel to start my confession, I quickly did so — just as the new Father began to slide the creaky, ancient window slat of the tiny booth open.

“Forgive me, Father, for I have sinned,” I murmured, making the sign of the cross.

I cleared my throat, somehow knowing exactly what to say next even though it had been so long. “It has been 10 years since my last confession. I accuse myself of the following sins.”

There was a pause. I could hear his breathing, his face inches away from mine in the dark, tiny chamber.

Before I could go on, he answered the question in my thoughts.

“And what was the nature of these immoral acts?” he asked, almost whispering. I felt him lean slightly closer to the small window between us.

“I desecrated a holy object.” Again, a pause — this one was much longer. Was I imagining how much more charged, tenser these pauses were becoming? The act of confession is already an inherently sexual one . . . and this one felt especially so. Why is there so much pleasure in revealing, in exposing oneself — in being interrogated and examined?

“And what holy object did you desecrate, Aileen?”

I felt a hot wave of shame wash over me. It was a very visceral reaction, simultaneously a full-body dread and an all-consuming compulsion to tell him every blasphemous, perverted detail of what I’d done.

“It was the cross, father. Well, the crucifix, actually . . . it was more the idea of the crucifix than the, uh, than the, um, object itself,”I stammered, beads of sweat starting to trickle down my forehead.

Were they from being cramped inside that uncomfortably small vestibule on such a muggy summer day? Or were they from the nervousness of having to reveal my depraved sexual practices to this strange man — this strange, handsome man who seemed so interested and intent on knowing the depths of my perverted (and, probably damned) soul?

The silence between us was suddenly interrupted by the echo of the cathedral doors closing, a sound that I knew — and I knew he knew — signaled the exit of the last altar server.