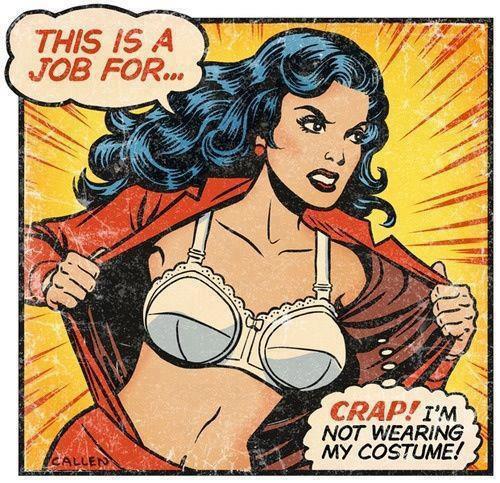 Comic book roleplay is something I’d never given much thought to before I became a phonesex goddess.

In fact, I’ve never even really sat down and read a comic book in my life. So, it was a surprise and challenge for me when it came up with a client of mine.

I’m always game for anything my clients throw at me and I try to give it my best shot. I came up with two superheroes: Gwen and Her Fierce Wonderbra and The Flash Fucker. When I, Gwen, put on my Fierce Wonderbra I have the power to hypnotize anyone who stares at my cleavage. I can control mass amounts of people and make them forget where they are or what they were doing before they looked at my breasts.

I imagine that we need to save the city from a corrupt Mayor. This Mayor is having a big dinner party and all of the major players in the city are invited. The Flash Fucker and I pretend to be waiters and we slip inside the Mayor’s mansion.

Once we make it inside successfully we case the joint and take note of everyone, from the staff to the guests. We decide now is the time to strike, so we strip out of-of waitstaff outfits down to our superhero gear. I stick my chest out as far as I can and begin to walk around the mansion. Everyone I encounter is instantly mesmerized by the sight of my high, firm,  beautiful tits.

Once I’ve gotten the attention of everyone I can find the Flash Fucker comes behind me and fucks each person into a stupor. Man or woman, it’s all the same to him.

The entire building has been secured….Or so we thought.

Just then we both get hit in the thigh with a dart. Looking around wildly we spot a sniper hiding behind a half wall. He must have been there the whole time and we never noticed him. The darts have paralyzed us and we both fall to the ground like two felled trees.

We’re quickly tied up, back to back. Our wrists bound tightly together with the same rope. As we are being blindfolded we see the Mayor walk in the room as if he were never under our control. He leans down into our faces and says “Did you two think your little sex tricks were gonna work on me? Not tonight, kids.”
….. Part 1 of many Fierce Wonderbra and Flash Fucker Comic Book Adventures.