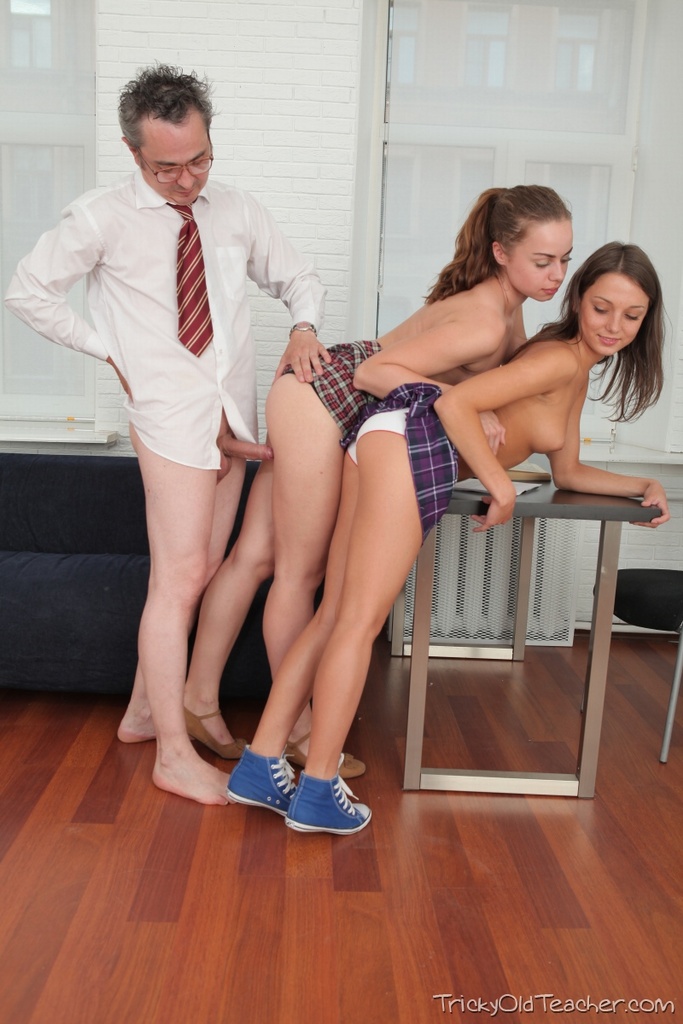 College girls on the warpath score the ultimate revenge

College girls may look sweet and innocent, but when we decide to take revenge things can get kinky. When I was in college my girlfriends and I had a professor named, Mr. Jenkins. He was a total pervert that liked to look up our skirts during class or try to get a peek at your tits when he was looking over your shoulder. None of the college girls in his class liked him, but he seemed to take a special delight in fucking with me and my friends.

At the end of the semester, he calls me and my two best friends, Shanna and Kim, into his office and said that unless we had group sex with him, none of us were going to pass his class. For this group of college girls, Mr. Jenkins had gone too far. That’s when I and my girls began to hatch a revenge plot to fuck Mr. Jenkins in ways he had never imagined.

Two days after our meeting with Mr. Jenkins, the three of us told Mr. Jenkins that we agreed to his terms.

We would have group sex with him in exchange for a passing grade for each of us. Mr. Jenkins flashed a creepy pervert smile at us. We could tell by the look on his face that he thought he had won the day. I put a piece of paper on the desk and told Mr. Jenkins to meet us at that address. He asked us why we wanted to meet in a questionable hotel on the bad part of town. Kim told him that none of us wanted this group sex session to get out, so we decided it was best to meet somewhere where none of us would be recognized.

Now, a smarter man would have smelled a set up a mile off, but Mr. Jenkins was too busy thinking with his cock to be bothered with the details and agreed to meet us at the hooker hotel across town.

A few nights later Mr. Jenkins met us at the hotel. The old man was hard, horny and ready to get it on with three hot college girls. Before we got started Shanna broke out the party favors and offered Mr. Jenkins a little nose candy. At first, the old pervert professor balked at the thought of drugs but seeing me do a line off of Shanna’s gorgeous tits quickly changed his mind. For about an hour Mr. Jenkins swilled whiskey and snorted blow while he watches me, Shanna and Kim make-out and plays with our hot, wet pussies. He smacked my ass and screamed that he couldn’t wait to rip me open with his hard cock. I kept up appearances, but I could tell Jenkins was starting to feel the dope kicking in. As he started to jerk his tiny, flaccid cock, Mr. Jenkins passed out.

When Mr. Jenkins came to, the girls and I had stripped him naked and tied him spread eagle to the bed. Mr. Jenkins woke up scared and confused when he realized that he couldn’t move. He yelled and screamed for us to untie him and let him go. He swore that if we didn’t let him up this instant he would have us all arrested for kidnapping and we would fail the class! Kim crawled onto the bed next to Mr. Jenkins and smacked him hard across the face leaving a big red handprint on his cheek. “

You think it’s fun to force young college girls to fuck you for a grade?” Kim screamed. “You’re the one who’s gonna get fucked, Mr, Jenkins” I answered.

Before Mr. Jenkins could protest some more, there was a knock at the door. Shanna opened to door to let our three frat boy buddies in. All three of them were drunk and ready to fuck. And frat boys being what they are, they didn’t care where their cocks went as long as they got off. Rodney was the first of the boys to realize what was going on. Rodney strode confidently across the room, pulling out his fat 9-inch cock along the way. He pulled Mr. Jenkins head back by his hair and said: “This is for failing me last semester old man.”

Then he shoved his fat cock into Mr. Jenkins mouth, gagging him on young, hard frat boy cock. Mr. Jenkins began to drool as Rodney fucked his mouth. I expected the old man’s cock to go limp from being forced to suck cock, but Jenkins’ lil prick began to stiffen. Seeing Jenkins’ ass spread open, our frat bro Bruno decided it was his turn to get in on the action and shoved his cock into Mr. Jenkins’ ass. Jenkins’ groaned as Bruno’s fat cock spread his asshole open. I have to admit, we the three of us put our revenge plot together, our goal was to break and humiliate Mr. Jenkins.

Never in my wildest dreams did I think that Mr. Jenkins would turn into a full-fledged cock whore that willing took frat boy cock. While Jenkins’ got all of his holes stuffed with cock, Kim and I took pictures for later.

After class on Monday morning, I and the girls asked if we could see Mr. Jenkins in his office. Jenkins tried to pull rank and talk about our failing grades until Kim pulled out her phone. Dozens of pictures of Mr. Jenkins doing blow, sucking frat boy cock and taking it up the ass flashed across the screen. “If you tamper without grades in any way, “ Shanna said, “we will upload these pictures to the school website and everyone will know what a nasty cock whore you are.” Mr. Jenkins went white as he assured us that we will all get a passing grade.

Do you want to be a cock whore for college girls?