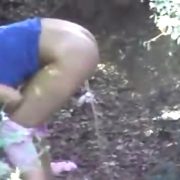 We are currently under national lockdown here in the UK and I have just moved back. So there’s not much to do on these cold and dreary days and Boris The Boss only allows us out for essentials.  But we can exercise and so I go running in the local park. However, I didn’t expect to be caught peeing outdoors on one of my runs!

Now, I have a little confession. On Sunday I went for a run, however, I timed it to coincide with the sexy stud that always goes at the same time every morning. He’s in his thirties, quite tall and dark-haired with piercing blue eyes.

Being married, I know I shouldn’t put temptation in my way, but this lockdown is so boring! And, hubby is away on business in the Far East. So what’s a girl to do? He’s only eye candy anyway. I was never going to take it further!

Soon, our paths crossed on the running trail. When he nodded hello I could barely contain myself. I was dying to just tell him how bloody hot he was, but I refrained and just said hi.

A few laps of the park later, I needed to pee and knew I wouldn’t make it home so I headed for the woods. I got there just in time. But the last thing I wanted was to be caught peeing outdoors! As soon as I pulled down my yoga pants – oops I forgot my panties – a stream of warm pee flowed freely as I squatted in my own alfresco bathroom.

It was such a relief. But as I jiggled around to rid myself of the last few drops, I became aware of somebody.

Caught In The Act!

“Nice arse”, he shouted.  As I turned around, standing less than 3 metres away was the man. THAT man. Sexy Runner Man. Wishing the ground would swallow me up, I asked how long he’d been there. “Long enough”, he smirked.

I noticed the huge bulge almost ripping through his shorts and became so distracted I felt like I was in a trance. I couldn’t move. Frozen to the spot, the next thing I felt was his cold hands as he came up behind me and pushed them inside my top. My nipples were so hard it was painful.

One hand moved behind me and I could feel his rock hard cock against my naked arse. It felt like a dream that I didn’t want to stop and within seconds I was on my hands and knees with his thick cock pushing against my pussy lips. Should I let him? No… I mustn’t! Did I have any choice? Probably not. Did I want it to stop? NO! Did he really just catch me peeing outdoors?

And then he entered me…

Banging In The Woods

On my hands and knees, Sexy Runner Man thrust his cock deep in my sodden pussy. What dirty doggie fun! It took no more than three or four thrusts and I squirted as never before. I screamed like a banshee in the stony silence and he came straight after me.

And then he said it.

The sight of me peeing had turned him on so much that he knew he had to fuck me. And he wanted me to pee on him. Alas, I was all peed out. However, we arranged to meet later that day. And that afternoon, in the woods, I got to fulfill one of my long-held fantasies. All because I was caught peeing outdoors!

Pissing On A Stranger – My Ultimate Fantasy

As soon as we met in the woods again, I pushed him to the ground. Lifting my skirt, I stood over him and pissed all over his cock. As the hot yellow liquid hit him he let out a grunt and shot his load.

Not a word was spoken as I pulled down my skirt and walked away. I won’t go running there anymore. I need pastures new. What other fantasies can I fulfill? I have so many…

To hear more about me being a cheating wife just give me a call!