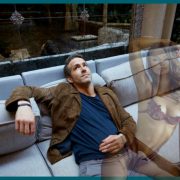 Cabin Sixty-Nine Ghost Girl – A Vacation to Remember! (from his POV).

Meeting a Cabin Sixty-Nine Ghost Girl wasn’t even on my radar; and being alone on your birthday just sucks. But, being alone on your birthday during a pandemic sucks ass!! I HAD to get out of my condo or I’d go mad. Fortunately, Olympic National Park had just reopened and since their cabins are far apart from each other, social distancing wouldn’t be a problem. So I paid my money, threw some stuff in a bag, and got the fuck out of the city. In about three hours I was at my cabin in the middle of a beautiful forest, with no protesters, no riot police, and no idiots waving signs that the whole pandemic was a hoax. The only downside was the thick black storm clouds rolling in.

I was glad I’d stopped to buy food and drink, if a storm hit, I wouldn’t be able to leave until it broke. The key was right under the mat where it was supposed to be; so I unlocked the door, stepped into the cabin, and closed the door. Ahhh! Wilderness! Tossing my bag on the sofa I was about to check out the kitchen when I heard the sound of the shower running. “Hello”? I called…the shower stopped. I waited, wondering what the hell was going on when the most beautiful woman I had ever seen opened the bathroom door and stepped into the living room. She was about 5’7″, long brown hair down past her ass, a towel wrapped around her under her armpits that hinted at a perfect figure. This was better than Holiday Stuffed Pussy!

What I didn’t know about the Cabin Sixty-Nine Ghost Girl could fill a book!

“Who the Fuck are you”? she asked.
“I’m Tyler and why are you in my cabin”?
“Your cabin? Listen Tyler” she sneered, “I paid good money for a week of solitude and I’m not about to let some stranger ruin it.”
“Look, Miss. I paid for this place for the weekend.” I reached into my bag and showed her my receipt.
“My name is Josette and here’s mine” and sure enough, she showed me HER receipt for a week starting the same day my three days started.
“Sonofa bitch..they double booked us” and no sooner were the words out of my mouth than a massive jolt of lightning lit up the room, followed by a huge blast of thunder. The sound made Josette jump, and her jump made the towel fall, giving me a fleeting glimpse of perfect breasts, a flat, toned stomach, dancers legs, and a perfectly waxed hoohah.

A perfect time to get to know my cabin sixty-nine ghost girl.

I picked up her towel and handed it to her and said “Well, I guess we’re roomies because neither of us is leaving in this storm. By the way, I didn’t see your car?”
She repositioned the towel and said “My friends call me Joey; and a friend dropped me off. Well, since we’re stuck here, we may as well make the most of it.”
“I’ll take the couch, Joey you can have the bed,” I said briefly wishing my mother hadn’t raised a gentleman. “Is there any hot water left? I really need to take a shower”.
“You should be fine, Tyler” giving me a look I didn’t quite understand, THEN.
So I grabbed my ditty bag and sweats and went into the bathroom. Standing under the shower, washing the grime of a three-hour car ride off me, I thought I heard something, but dismissed it. Just as I started to shampoo my hair, I heard the shower door open and felt soft yet surprisingly strong hands wrap around my waist and very firm tits press into my back. I must have jumped a foot high, but Joey stayed right with me. So, I rinsed my head under the shower I got the shampoo out. I wanted to see this! She turned me around and grabbed my raging hard-on, stroking it and squeezing it, before dropping to her knees, and in one fluid motion swallowing all nine inches down her throat.

The water cascaded down my back, and I watched as Joey deep throated my cock and dragged her teeth across it almost painfully. I was about to say something, but then her teeth disappeared and all I felt were her velvety soft lips and her silky smooth tongue. After as much as I could stand without cumming, I pulled my cock out of her mouth and lifted her up.
I turned her around and pushed down on her shoulders and she bent over from the waist, placing her hands flat on the tile floor. The look of the water beading on her amazing ass and perfect pussy, I’ll carry with me to the day I die. But I digress. I grabbed her hips and pushed my cock into her tight, wet pussy. I buried all the way inside her, my balls resting against her pussy lips. So, I started to fuck her and I was amazed at how tight she was. I thought she was going to break my cock! However, the faster I went, the more she moved her hips against me. And, the tighter her pussy clamped around my cock.

Cabin sixty-nine ghost girl was a ride to heaven.

The rest of that night was a blur of fucking, licking, sucking, pinching…nipples, clits, asses, breasts, I have never in my life experienced a night like that before or since. Joey was quite simply the best fuck I’ve ever had. We ended up in bed and I fell asleep completely and utterly drained of fluids. In the morning I woke up and she was gone. No note, no luggage, nothing. When I called the booking agent who had made my reservation, I complained about the double booking.
Of course, I was trying to get leverage to find out how to get in touch with Josette again.
“You must have met the Cabin Sixty Nine Ghost Girl”, she said.
“What are you talking about?” I replied
“It’s a tragic story, really” she explained. “A couple was up here for their honeymoon and they both died in a climbing accident. Ever since, on their anniversary, we get strange reports of phenomena going on in that cabin. I’m terribly sorry, sir, would you like a refund?” she asked.

Hmmm. A refund for the time of my life with your cabin sixty-nine ghost girl?

“Absolutely not,” I replied, “I’d like to book this cabin for this weekend for the next 10 years.”
I smiled to myself thinking, ‘I’ll never be lonely on my birthday again.’
Stay tuned if you want to find out what happened between us on his next visit with the haunted cabin sixty nine ghost girl! Moreover, you can ALWAYS call the Cabin Sixty-Nine Ghost Girl yourself. Get some hot phone sex. Ask for Just Joey. Giggle.
Kiss, kiss!