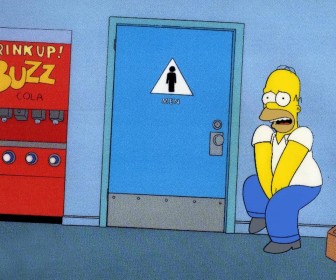 It’s so cute when a grown man is reduced to acting like a little boy. Nothing makes them do this quicker than denying them the use of a bathroom with a full bladder. There’s a guy, Eric, who does amateur videos online and most of them are about him needing to pee but holding until he finally loses control. He says it’s like an orgasm when he finally lets go. I like his videos; it turns me on seeing him squirm and hearing him moan as he tries to keep it together. I sent him a message and he replied back which led to us being email buddies. Eventually we arranged a date.

We met at a restaurant and throughout the meal I kept encouraging him to drink up. When we were done eating he got up to go to the bathroom but I stopped him. He would go when I gave him permission. He acted upset but I knew he was enjoying our little game. We walked back to his place and when we were about halfway there I noticed he put his hand in his pocket.

He was probably clutching his dick and hoping I wouldn’t make him piss himself in public. I gave his arm a quick yank and he gasped.

I asked if he had squirted a bit. He blushed and nodded. When we got home I took him straight to the bathroom. He undid his jeans while I stood beside him and I noticed a wet patch on his boxers. He started to piss and when his stream was starting to get strong I told him to stop. He didn’t and I clamped my hand around him. He managed to stop and I told him that I hope he enjoyed that because he wouldn’t go again until morning. He told me he couldn’t wait that long but I ignored him. At around midnight he woke me up and said he really needs to pee. I told him to go back to sleep and he whimpered. I could feel the mattress shift as he tried to get comfortable.

He woke me again just after 6. He had a pained look on his face and he kept squirming. He said he couldn’t wait any longer. I put my hand over his bladder; it was hard and sticking out. I pushed on it and he gasped loudly. He grabbed his dick and got himself under control. I told him that he could pee soon. I got up, went to the kitchen, and came back with a glass of cold water. He didn’t want to drink it but I made him. He bent over as the cold water hit him and started
begging me to let him pee. His hand pinched his dick shut as he rocked back and forth, telling me he needed to go now…

How can I torment you before giving you sweet relief?