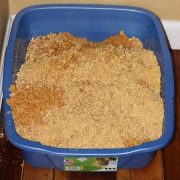 “Eat it, bitch” I commanded. The disgust I’d always felt for him seemed to multiply exponentially as I towered, looming over his ugly face. I didn’t care if he enjoyed his bestiality scat fetish treatment. Because it was going to be LOTS of fun for me.

Also, beneath me I noticed him attempting to splutter out some kind of feeble protest. I laughed. “Is your dick getting hard?” It was.

My friends and I circled around, our tall boots swarming like tall, freshly shined vultures. He started to cry. “Don’t make us force-feed it to you,” I growled menacingly. He trembled. I laughed even harder. We all laughed.

So I grabbed him by his greasy, flaccid ponytail and shoved his face into the litterbox. “Bon appetit, mother fucker!”

“Open your mouth, goddamnit!” I snarled, pushing his head deeper into the shit strewn sand.

At this, both I and my male friend who’d zip-tied Art busted out laughing at this admission. It didn’t surprise us either. I reached down and pinched his grotesque little button nose. And, thank goddess, he finally opened his foul mouth. I pushed his face deep into an at least two-week-old mound of cat poop. And he ate it as if he was starved.

“You’re getting hungry now, aren’t you? At least you’re finally cleaning something up,” I told him as his nasty, thin cocksucker lips wrapped around another shitpile. Apparently, he had asked my lady friend, Lena, if he could just do her and her boyfriend’s laundry in exchange for listening in on their fuck sessions sometimes. Or just “knowing” they were fucking. Ew.

Hungry loser Art was still eating up the cat litter, finally doing a semi-decent job cleaning SOMETHING up. I couldn’t help but giggle. And I wondered how much he could get down without puking. I didn’t have to wonder long.

“If you don’t eat that right back up, we’re going to make you suck the next shit the cat has to take out of his ass . . . AND suck his dick.” Due to the diabolical genius of this line, Lena could barely stifle a laugh delivering it.

And so unfortunately for him, he started projectile vomiting right back into the litterbox.

“Oh no, guess that means he’s hungry for throw up and cat dick! What do you think, Lena?” I asked.

Few things have amused me in recent years more than forcing Art’s mouth around the cat’s limp dick. Personally, I can’t wait to see him again in public!